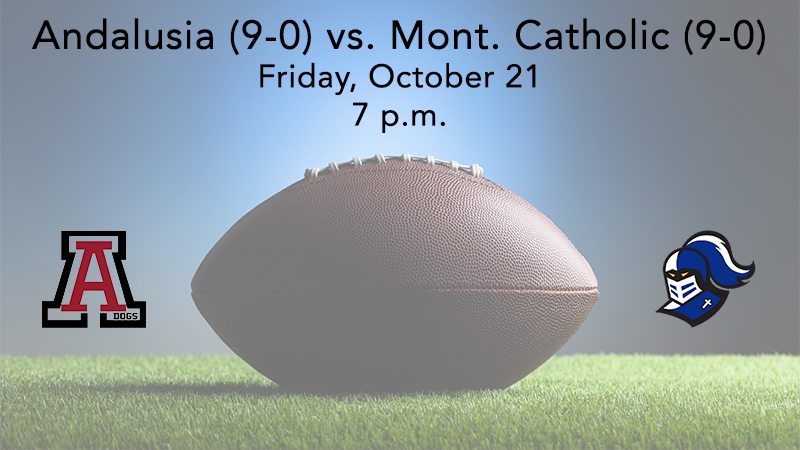 With anticipation riding high, the third-ranked Andalusia Bulldogs (9-0, 6-0 4A Region 2) will host top-ranked Montgomery Catholic (9-0, 6-0) with the region title up for grabs in a regular season finale Friday, Oct. 21, at 7 p.m.

For the Bulldogs, the regular season will close with several historic milestones already reached this season. Last week’s win over B.T. Washington was the 600th in program history while earlier in the season Head Coach Trent Taylor won his 77th game with the program, surpassing Don Sharpe as AHS’s winningest coach.

On the field, it is one for the history books, too. The Bulldogs have outscored opponents 428-105 behind a strong running attack and timely passing. The defense has dealt two shutouts over the first nine games.

The Bulldogs go into the final regular season game tied with Montgomery Catholic atop the Region 2 standings, setting up this week’s pivotal contest between two of the top-three ranked teams in 4A. The two teams meet for the third time with the Bulldogs leading the series 2-0.

“Montgomery Catholic has tremendous athletes at just about every skill position on the field. They will bring a defense that has given up little to nothing all year long. Offensively, they’re probably as balanced of a high school football team, as you will find. They are not a team where you say if you stop them from running, you have a chance to win, or if you stop them from the throw, you have a chance to win. They do either and with great efficiency, so there is no doubt it will be a tremendous challenge. Coach (Kirk) Johnson and his staff do a great job. Their special teams are phenomenal, and they have the three facets you need,” Taylor said.

Andalusia knows the importance of playing a huge game.

“It’s always good to be at home and we have been in situations before with a lot on the line. Our kids will play hard and we know Catholic’s kids will do the same. They could get the upper hand and thrive off that to make it very tough. We have to avoid making turnovers, but it should be a good game,” he said.

The Bulldogs did many things right when they picked up their 600th all-time win last week in Tuskegee.

“Reaching 600 wins is definitely a milestone win for our program. I’m proud to be a part of it and it’s certainly a big deal for Andalusia. We had two really impressive offensive drives of 11 and 14 plays in the first half at Booker T. Washington. It was good to have Kaden Denson back who adds another element for us with his speed. I thought Jack (Lathrop) threw the ball well and we did a really good job up front of handling a loaded box. I like to think we were a pretty balanced team.”