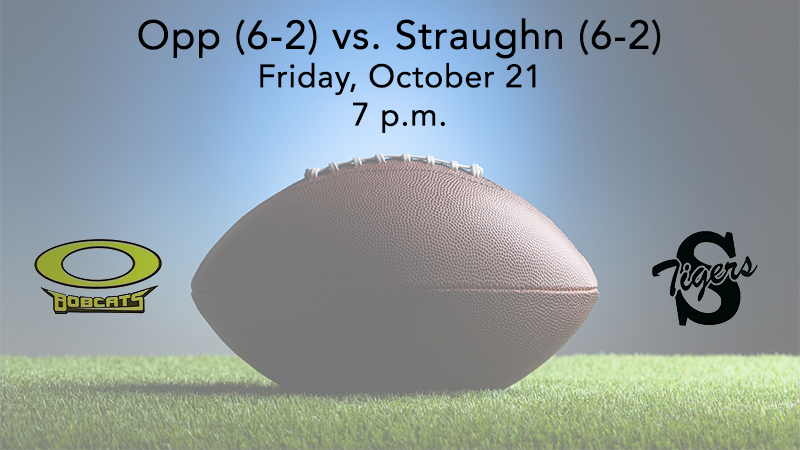 The two teams will square off for the 19th time overall in the modern era. The Tigers lead the all-time series 11-7 since 2002, but the Bobcats have won six of the last seven games.

“Opp has a great team and is having a great season with two losses to two teams that are both undefeated. They are really explosive on offense, and we will have to work really hard this week to prepare for them. I know our kids will be excited for the challenge. Coach Dubose and his staff do a great job, and Opp/Straughn is a great rivalry game. These types of games are so much fun and are what high school football is all about. We are excited about the opportunity,” SHS Head Coach Ashley Kilcrease said.

“Straughn is the only other team I’ve seen on film that has played Houston Academy and played them close. Straughn had chances to win when those two teams met this season. There is a tremendous amount of sacrifice required to play and coach the game right, and Straughn is another one of those teams. Coach Kilcrease, David (Lowery), and all his staff are outstanding coaches and have a very good football team. They are probably a little deeper in talent than Houston Academy or us, so it will be another tremendous challenge for our guys. We have our work cut out for us,” OHS Head Coach Mike Dubose said.

Both coaches spoke about their previous region matchups.

“I was proud of the way we went out against Northside Methodist and took care of business. Aaron Olhava and our offensive line had a big night. 312 yards on 13 carries is definitely a productive night. It was also good to get some young guys experience in a great atmosphere at Rip-Hewes Stadium,” Kilcrease added.

“We knew going into the game Houston Academy was a very well-coached team and came away thinking they were better than we originally thought. I am very impressed with the way Eddie (Brundidge) and his staff have done with all the adjustments they made during the game. We were very fortunate because it could have been much worse. They outcoached us and outplayed us in every phase of the game, and I have more respect for them now after seeing how physical and quick they are,” Dubose added.

The Bobcats earned a 42-0 shutout over the Tigers in 2021. Straughn dispatched Northside Methodist on the road last week, 44-14, while Opp fell to Houston Academy on homecoming, 42-7.