Opp pulls away in second half for region win over Straughn, 38-14 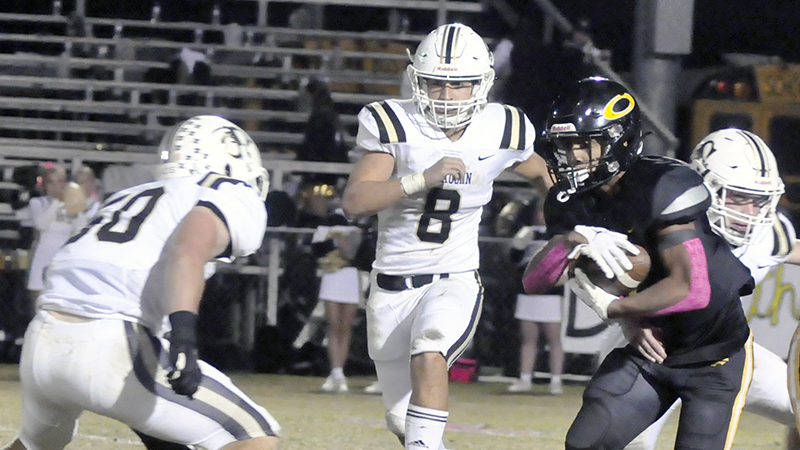 Opp’s Terry Davis, right, looks for an opening on a run play as Straughn’s M.J. Dauphin and Drew Ferguson play on defense. (PHOTO BY ZACK MAIO)

Opp led from start to finish and scored 21 unanswered points to break away from a three-point game and defeated Straughn at home, 38-14, in football region action Friday night.

The Bobcats (7-2, 5-1 3A Region 2) clinched the two seed and a first-round home playoff game, while the Tigers (6-3, 5-2) fell into a third-place tie entering the final week of the regular season.

Terry Davis took the first play 72 yards for a touchdown. Prent Huggins added the PAT and gave the Bobcats an early 7-0 lead 19 seconds into the game. A fumble on the first visiting snap gave the hosts great field position at the 34, but the Tigers held serve on defense and forced a punt. After 21 yards on two carries by Aaron Olhava, another fumble proved costly. Gray Jennings threw a 24-yard touchdown pass to Robbie Gafford on the initial play again and increased the lead to 14-0 with 7:14 left in the first quarter.

Straughn took over at its own 22 and cut the deficit in half. Layne Grantham connected with Micah Turner on a 24-yard pass and first down. Grantham then found Parker Black open for 13 yards and moved the chains again. Nicholas Williams had a 15-yard run into the red zone and closed the 10-play, 78-yard drive with a 5-yard touchdown reception. Brenden Bartholomew added the extra point and made the score 14-7. Opp took over and used a lengthy drive at the end of the first quarter. Jennings converted a third-and-16 with a first-down pass to A.J. Coleman. Davis followed with two runs for 12 yards before a 16-yard pass from Jennings to Gafford. After a personal foul, Huggins knocked a 27-yard field goal for a 17-7 lead with 9:33 to go in the half.

The Tigers rallied back with another nifty drive. Olhava converted a fourth-and-1 with a 7-yard dash aided by another personal foul call. Following a deep 41-yard pass from Grantham to Black, Olhava had a 20-yard run. Williams scored from eight yards out and sliced the gap to 17-14 at the 5:10 point of the second. The Bobcats were pinned back deep on their next drive but not fazed as Davis had a 94-yard touchdown run. The PAT was good and set the halftime score to 24-14.

Olhava opened the second half with a 17-yard run for a first down before the drive stalled. Opp was able to get one first down on its first drive after the break but also had to punt. Straughn continued to be held in check by the home defense, and Davis had 36 rushing yards. Neither team scored in the third quarter as the game moved to the fourth.

Davis began the final frame with a 6-yard touchdown run, and the PAT took the score to 31-14 with 11:54 to go. After another three-and-out, the Bobcats chewed up the clock on four runs by Davis. Jennings added a 31-yard pass to DaDa Stoudemire and set up a 10-yard touchdown run from Davis. Olhava had a 30-yard run for a first down before the Tigers turned the ball over on downs, and the game ended without another score.