Wildcats roar past Kinston in second half for playoff berth, 56-30 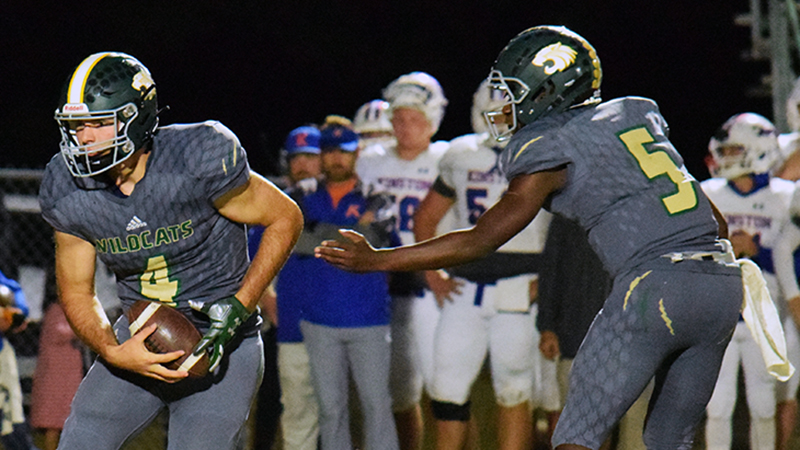 Florala pulled away from a close game at halftime and used a big second half to take down Kinston at home, 56-30, in football action Thursday night. 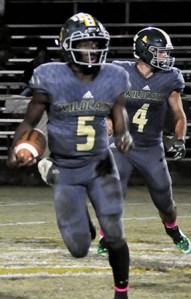 Coleman had a hand in seven touchdowns for the Wildcats’ Thursday night win over Kinston. (PHOTO BY ZACK MAIO)

Kinston took the opening possession but was forced to punt after a three-and-out. Florala took over and converted a third-and-11 with a 17-yard pass from Rayshon Coleman to Christian Greasham. Coleman picked up 40 yards and moved the chains twice on the ground before finding Greasham on a 6-yard touchdown pass. The PAT failed and kept the score 6-0.

The Bulldogs answered back on just two plays as Jeb Crosby tied the score with a 34-yard touchdown run 20 seconds later. Johan Zamora and Coleman began the next drive with back-to-back first down runs. Coleman capped the drive with a 9-yard touchdown and added the two-point try for a 14-6 Wildcats lead with 3:54 to go in the first quarter. Matthew Sumblin needed one run for 65 yards just 16 seconds later, and the conversion was good to even the score at 14-14.

Kinston intercepted a pass on the next drive and turned it into its first lead. Crosby ended the drive with a 6-yard touchdown run, and the PAT made the score 21-14 at the end of the first. John Howell had a 44-yard kickoff return and set up a 17-yard touchdown run from Coleman early in the second quarter. Florala pulled within one at 21-20 before the Bulldogs had a response. Sumblin threw a 51-yard touchdown strike to Brant McCollough, and the extra point was good for a 28-20 lead. Colby Strickland made a first-down reception of 24 yards on the next drive. Coleman found Greasham again on a 16-yard touchdown pass, but the conversion failed and left the Wildcats trailing 28-26 with 9:16 until halftime.

After the home defense got a big sack by Howell, Coleman had a 14-yard touchdown pass to Greasham and added the two-point try, putting Florala in front 34-28 at the break. The Wildcats increased their lead to 42-28 on the first possession of the second half. Coleman found Dalton Jackson on a 25-yard pass, and Zamora darted 42 yards to the end zone. The defense came up big again and forced Kinston into a turnover on downs. The Bulldogs earned a safety and cut the deficit to 42-30 after three quarters.

The Wildcats put the game away with two fourth-quarter touchdowns. Coleman had two runs for 26 and 19 yards. Bradley Norman delivered an interception as the Bulldogs were driving late, and Jackson iced the contest with a 14-yard first-down run to seal the win.

Florala will be back home for senior night Friday, Oct. 28, against Brantley in another key region game to determine final playoff seeding.