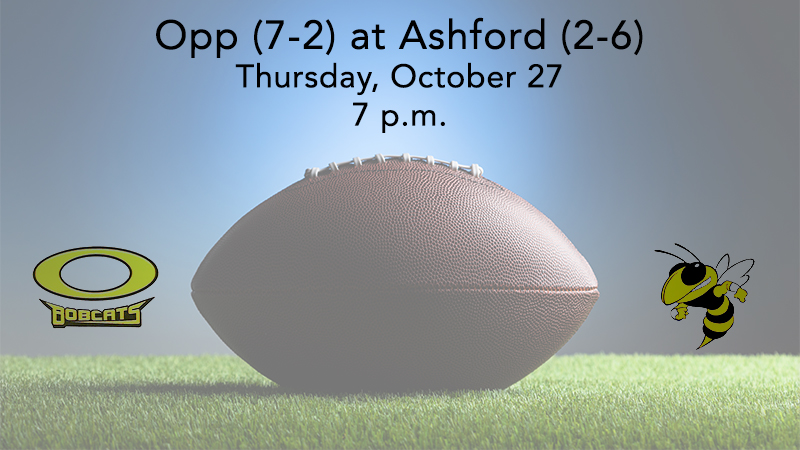 The teams play for the first time since 2009 in their 22nd all-time matchup. The Bobcats have a 14-7 series lead against the Yellow Jackets.

“According to their film, Ashford is big and somewhat orthodox on offense. They get into power running formations and are strong up front. Some of their backs look like linebackers, and they are a team who will run power football at you. They’re also a 3-4 defensive team. For us, it’s going to be about approaching the game and looking it as a way to improve. We will have to make some decisions because it really doesn’t have bearing on the playoffs. Of course, we always play to win, but if we need to pull some guys who are banged up and rest them, we will,” said Head Coach Mike Dubose.

Dubose added that the key to last week’s home was playing hard and physical.

“We played much better at the line of scrimmage than we had in the last couple of weeks. We were able to run the football better, especially in the second half and really played well offensively and defensively. We changed our plan up some and ran the ball more and used the play-action pass off big plays. I thought we executed our game plan better and felt it was our best offensive game of the season so far.”

The win last week gave Opp a first-round home playoff game. “Obviously, we would have loved to have won the region, but Houston Academy was able to do that. We still achieved one of our goals, which as to be at home for the first round of the playoffs,” he said.

The Bobcats fell in overtime against the Yellow Jackets 13 years ago, 33-27. Opp previously used a big second half and topped Straughn, 38-14. Ashford hosted Northside Methodist and came up just short, 31-28.