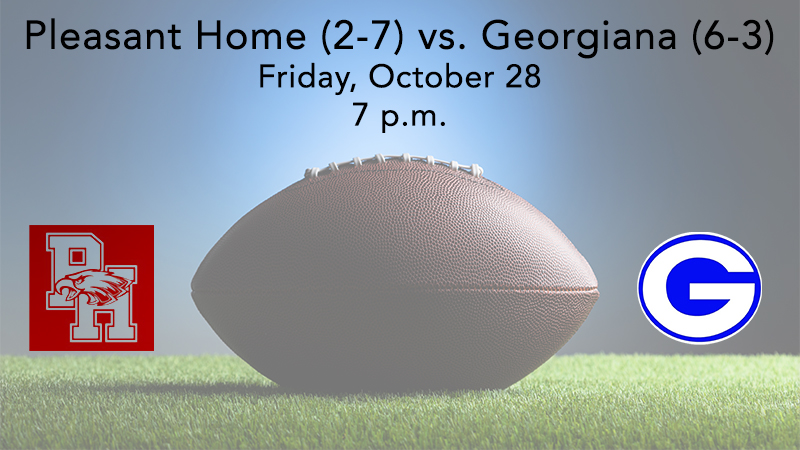 This will be the 13th consecutive season the two teams have played since their inaugural contest in the 2010 season. Although the Panthers hold an 8-4 series lead, the Eagles were able to snap their eight-game slide last year.

“Coach (Berry) Bess has done a phenomenal job this year at Georgiana. When you watch them on film, you see a team with an identity they are comfortable and confident in. Their effort and execution are a testament to the job he has done. Their athleticism and speed will present a set of challenges we will have to overcome with execution and effort. With a playoff spot on the line for them, we know we will get their best game,” Head Coach Cody Sellers said.

Pleasant Home showed improvement on defense and special teams in its previous game, according to Sellers.

“I was pleased we improved in special teams but felt like we didn’t execute offensively like we are capable of. We left some plays on the field the other night. Elba’s execution and talent obviously made things difficult. We had some things aligned for success but couldn’t executive them to move the ball the way we wanted. Defensively, I believe we played better up front than we have in a while, but we didn’t match up well on the next levels. Credit to Elba as a team. They are physical and execute their plan very well.”

Sellers and the Eagles can end the season strongly by impacting the playoff picture. With a win over Georgiana, Red Level would become the region’s fourth seed. “Although our playoff hopes are no longer possible, it is fun to play games in October that matter. We will be excited to play under the home lights one more time for our community,” he said.