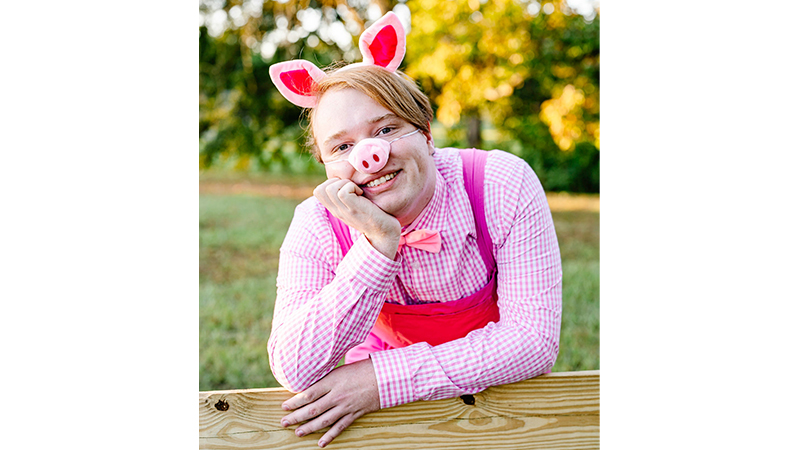 Luke Gay, a junior at Straughn High School, will play the role of Wilbur in ReAct Theatre’s production of “Charlotte’s Web.” (SUBMITTED PHOTO)

Luke Gay said being involved in theater changed his life.

The Straughn High School junior is cast as Wilbur in the ReAct Theatre and Arts production of “Charlotte’s Web,” set for this weekend in the Dixon Center at LBW Community College.

It’s only his second show, and he’s landed a leading role in both productions. Last spring, he earned the role of the beast in the Covington County Schools’ production of “Beauty and the Beast.”

“I tried out because I had always wanted to be a part of musical theater,” he said. “I tried out for the role of narrator, but they asked me to do Beast.”

While “Beauty and the Beast” was his first opportunity to do theater, he was well prepared. After the pandemic sidelined his voice lessons in 2020, Gay began studying vocal techniques online.

“I had always been a fan of music that tells stories,” he said. “But I had never been introduced to musical theater.”

Many hours of video later, he had a better idea of his interests and abilities.

He’s now a part of the Straughn High School String Band and involved in his second theatrical production. He’ll be on stage with the String Band at the Kiwanis Covington County Fair Friday night, and on stage as “Wilbur” the rest of the weekend.

“Charlotte’s Web” is the story of a pig, Wilbur, who was born the runt of the litter and destined for instant death until being rescued by a young girl, Fern. In the barn, Wilbur makes friends with a spider named Charlotte, who saves him from the ultimate fate of becoming bacon.

The cast is populated with other barnyard animals, as well as the extended family surrounding the farm where Wilbur grows up. The production features veteran actors and newcomers – community members, and students from Andalusia, Straughn, Pleasant Home, and LBW Community College.

Gay said that in addition to being fun, theater gives participants the ability to become whomever they want to be.

“It’s so empowering,” he said. “You don’t have to be yourself, you could be someone else.”

And in a way, the experience of being Beast on stage did just that.

Gay said he’d always been considered a nerd, and had been bullied by his peers. Theater changed that.

“After ‘Beast,’ everything at school changed,” he said. “I haven’t been bullied since. The Monday after that performance, one of my classmates actually asked for my autograph.”

At first, he thought he was being bullied again.

“They were serious,” he said. “I wrote my name in cursive and went with it.”

For those interested in the theater who’ve never auditioned, Gay has one piece of advice.

His advice is eerily similar to the message he gleans from “Charlotte’s Web.”

“(‘Charlotte’s Web’) taught me about the concept of death,” he said. “The message for me is that we all have limited time in this world, and we should make the best of it.”

Gay is the son of Julie (nee Merrill) and Marty Gay, and has two siblings, Lydia and Isaac.

PowerSouth is sponsoring a student performance of “Charlotte’s Web,” on Thursday, and students from elementary schools across the county are expected to fill the auditorium at LBW Community College.

Public productions are set for 7 p.m. on Saturday, Oct. 29, and for 2:30 p.m. on Sunday, Oct. 30, in the Dixon Center for the Performing Arts on the campus of LBW Community College.

Tickets are $10 each and available at Harold’s and Rody Mil Market, or online at EventBrite.

A link for online tickets is available on the ReAct Theatre and Arts Facebook page.