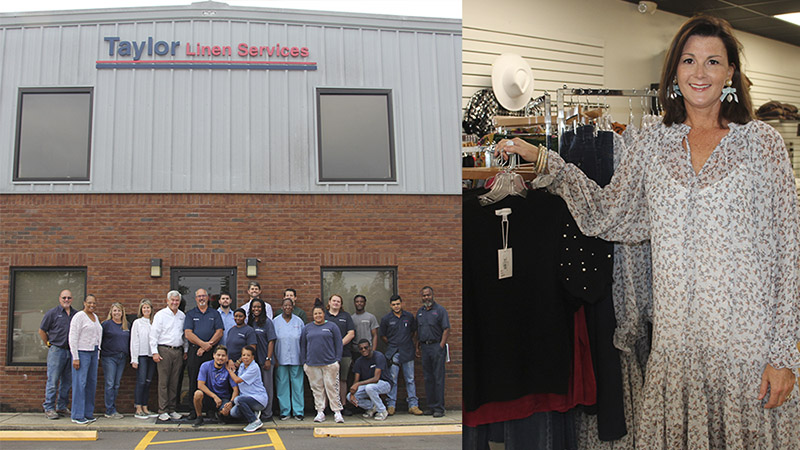 LEFT: Taylor Linen Services has served the local community for the last 25 years. RIGHT: Terri Proctor will represent Town and Country Boutique at the Chamber of Commerce Association and Business Council of Alabama’s awards ceremony in November. (PHOTOS BY ZACK MAIO)

Andalusia’s Town and Country Boutique and Taylor Linen Services have each been named finalists in the Alabama Small Business of the Year Awards.

Merle Jones opened the doors of Town and Country on the square in Andalusia in 1951. After about a decade, they moved down South Three Notch Street to the former Foreman’s Funeral Home or the “green house” as everyone called it. Mrs. Jones’s daughter Pat Thompson continued to own and manage the store until approximately 2010 when it was purchased by a second owner. She eventually moved out to the western bypass and formed the Trio shopping center with two other local merchants.

Terri Proctor purchased the shop in the summer of 2020 and immediately got involved with the City of Andalusia in working towards moving Town and Country back to downtown Andalusia. In early 2023, the shop will open up in the Prestwood Building, just steps from its original location in 1951.

“We were nominated by the Andalusia Area Chamber of Commerce to represent Andalusia in the category of small businesses with one to 10 employees. I currently have four employees working for me at the shop. I worked with Laura Wells at the Chamber to compile a list of projects I have been involved in with our community. These awards are based on civic involvement,” Proctor said.

Presented annually by the Chamber of Commerce Association of Alabama (CCAA) and the Business Council of Alabama (BCA), the awards recognize businesses of merit based on a variety of civic endeavors, business success, and community involvement.

Proctor was contacted by Paige Hutto with the CCAA about Town and Country being chosen as a finalist.

“I am excited to represent my hometown and this amazing and supportive community. We have something special here in Andalusia, and I look forward to taking a little bit of our corner of the state to the awards ceremony in November,” she said.

Taylor Linen Services, a finalist in the 51-100 employees category, first opened its doors in Andalusia in 1997.

“It began with a commitment to be the best linen and uniform provider in our market and a business with a safe and desirable work environment. Andalusia has a strong pro-business city government. We also have great public schools that help attract employees with young families to town,” said office manager Katherine Jones. “We are looking forward to representing our employees and our town at the state’s Chamber banquet.”

Jones added that this recognition is exciting for the company’s entire team.

“What we do every day is long, hard, hot hours and often not the first industry people think of. While we work hard every day to provide a superior product and service for each of our customers, we also work equally hard to make Taylor Linen Services a business where people are proud to say they work.”

According to Jones, there are several benefits of working in a family-run business.

“It is much easier for all employees to be an on-the-field teammate, not just a benchwarmer. We all know each other personally, and when your employer knows you as a friend, they don’t call it a day and leave you there working. They stay and help you also get finished. While the business name represents one family on our team, we have many families with multiple family members working here. At one time, we counted as many as eight families with two to five members of their individual family currently working at Taylor Linen Services,” she said.

All award finalists will be honored at The BCA/CCAA Partnership Annual Meeting on Wednesday, Nov. 30, in Birmingham. Three winners (Gold, Silver, and Bronze) will be awarded in each of the four categories. Each category will be represented by 10 finalists across the state.