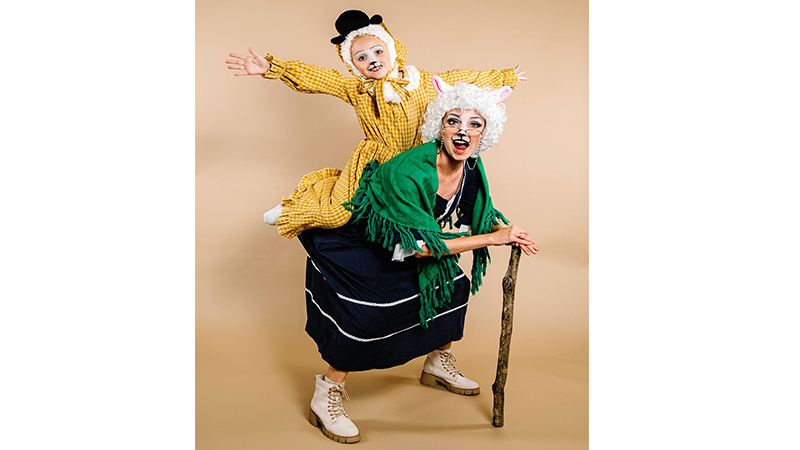 After fleeing Ukraine earlier this year, Ivanka Bzhezinska and her daughter, Emi, are making a new life in Andalusia and have brought their theatre experience to ReAct Theatre’s production of “Charlotte’s Web.” (PHOTO BY CANTSKIPTHIS)

Members of the audience in this weekend’s production of “Charlotte’s Web” might notice that the Old Sheep and the Lamb speak with an accent.

That’s a Ukrainian accent, to be exact, and it’s very real.

Ivanka Bzhezinska and her daughter, Emi, fled Ukraine after the war began earlier this year. They’re putting their acting backgrounds to use in the ReAct Theatre and Arts production this weekend. Ivanka holds a master’s degree in acting and has 19 years of experience. She worked with a theatre in Kiev, where a theatre association can be a lifetime job.

“They fired me when I came to the United States,” she said.

For her part, Emi first appeared in a movie when she was 4.

After some uncertain months that began when Russia invaded Ukraine in late February, the mother and daughter pair accepted an invitation from First United Methodist Church of Andalusia to live here.

“We had to make the decision to leave very quickly,” she said.

And that decision was based on the best thing to do with Emi for the present, she said, without worrying about the future.

“Even though my grandparents talked about the second World War, nobody really knew what to do in this situation,” she said. “You don’t think about future steps, just what you’re doing now. You make the best decision for that moment, and do it.”

When they came to the United States, they were first with family members in California who left what was then the Soviet Union in the 1990s. They also had been in New Jersey.

“The church invited us here and became our sponsors,” Ivanka said, adding that it was nothing short of a miracle.

“It is very hard to start somewhere,” she said. “The paperwork just to rent a room or apartment is overwhelming.”

The Bzhezinskas have permission to be in the United States for one year.

“We want to stay and build a new life,” she said. “I fell in love with this city. It was a big, big miracle for us.”

In Andalusia, she has found people with an appreciation for the arts who like challenging themselves with books, stage performances and music.

“They want to be intelligent persons,” she said.

The opportunity to practice her profession in “Charlotte’s Web” was another great opportunity.

“God really gave me a big present,” she said. “This is an amazing cast.”

Emi learned English primarily from watching English-language cartoons and was practically always bilingual, her mom said. Ivanka has had to work a bit harder, especially memorizing script in English. But while most people think the hardest part of acting is learning lines, Ivanka said that’s only a small part of the process.

Ivanka said she follows current events in Ukraine closely, something that did not interest her family in California.

“My husband, parents, brother-in-law, my cousins, all of my family are there,” she said.

While men have not been forced to fight, they are not allowed to cross the border.

“For eight months, we haven’t seen each other,” she said of her husband, Stas, who also was an actor. While Stas did not lose his job with the theatre, there is now limited power in Kiev, and Ivanka wonders at the future of the theatre. Meanwhile, her husband has been studying computer coding.

The mother and daughter pair have received a warm welcome here, Ivanka said. When Emi turned 9 last weekend, both her theatre and church friends celebrated with her.

Ivanka works with drama students at LBW Community College once each week.

“Templeton is my student,” she said, speaking of LBW’s Jay Osborne, who is cast as Templeton the Rat for the weekend performance.

Emi is enrolled in ballet classes with the Andalusia Ballet, and mother and daughter will make their next stage appearances in “Nutcracker” in December.

“I really want to thank everyone,” she said. “They can’t even imagine what they are doing for us.”

The Rev. Ken Jackson, pastor of First United Methodist Church, said the response from both the local church and other Methodists in the region has been uplifting.

“There is an old song that says, ‘Would you treasure going home if you’d never been away?’ For us, we now have a better sense of how we are all connected at a much deeper level than being Republican or Democrat, American or Ukrainian, black or white. We are all part of something larger, and we are called to be the hands and feet of Christ.”

The Methodist Church observes World Communion Sunday in early October, with a focus on how United Methodists have a universal and inclusive connection with those of other faiths across the globe.

“Ivanka and Emi wore their native dress, and baked bread that is used in Ukraine,” Jackson said. “I was so moved when they came down the aisle and offered the bread, I had no words.”

Public productions of “Charlotte’s Web” are set for 7 tonight, Saturday, Oct. 29, and for 2:30 p.m. on Sunday, Oct. 30, in the Dixon Center for the Performing Arts at LBW Community College.

Tickets are $10 each and available at Harold’s. Home, Rody Mil Market, and at the door.