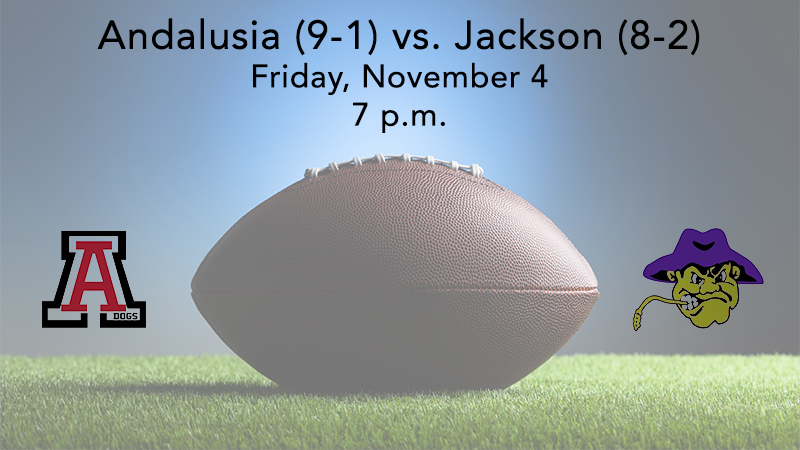 This will be the 12th all-time meeting between the two teams and the first since 2009. The Aggies hold a slim 6-5 series lead over the Bulldogs.

Region 2 second seed Andalusia enters the playoffs for the 28th time in school history with an overall record of 37-25 and is 15-12 in the first round. Region 1 third seed Jackson makes its 35th appearance with a 43-32 mark and is 20-14 against opening-round opponents.

“Jackson is probably as tough of a draw as you can get for a home playoff game in the first round. It would be hard not to say they’re the best team in their region right now. They are extremely talented and played in the semis last year. They lost a really good quarterback and replaced him with one who is going to be good if not better. He’s a freshman who throws the ball all over the field. It will be quite a challenge for us,” said Head Coach Trent Taylor.

The Bulldogs last took the field two weeks ago against Montgomery Catholic.

“The bye week was good, and we always enjoy having that the last week of the regular season. We gave the guys a few days off and even practiced with the young guys one day. It was exactly what we wanted it to be. They will either regroup or regenerate, and we will see what happens at practice this week,” he said.

Taylor added that one of the goals at the start of the season was making the playoffs.

“The biggest and most positive thing is that when you play an opponent like these guys are, you get them at home. Sometimes, when new guys come and play at our venue, it’s pretty exciting for them. Their game is going to elevate, and our kids are used to it on a daily basis. Hopefully, they and will come out with the same mindset, so we’ll see.”

The winner will play American Christian or Munford in the second round next week.