Florala travels to Millry in round one of playoffs 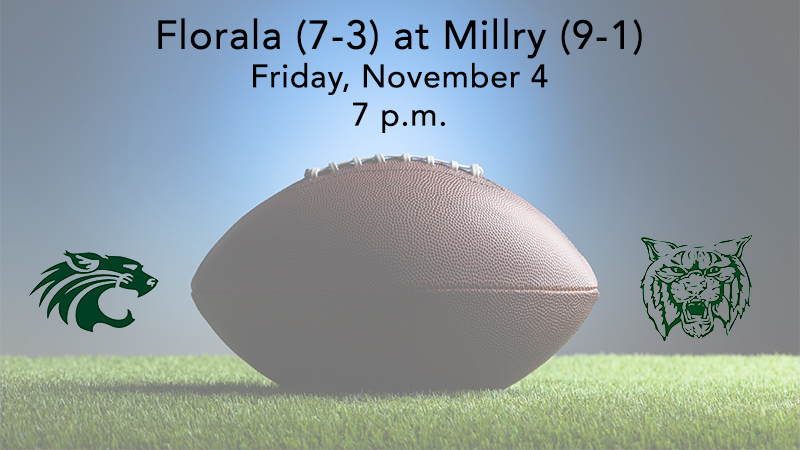 It will be only the second all-time contest between the two teams as Millry won the prior matchup with Florala three years ago.

Region 2 fourth seed Florala is in the playoffs for the 23rd time with an overall record of 12-22 and 9-13 in the first round. Region 1 champion Millry is in the postseason for the 24th time with a 9-23 record and an 8-15 mark against opening-round opponents.

“Millry has a lot of players and is sound everywhere. It came down to them and Leroy, and they got the one seed. Offensively, they have a balanced attack of running and throwing. Defensively, they are very aggressive and like to bring a lot of pressure. We have our work cut out for us, but we have been playing teams like these in the region,” Head Coach Jordan Cantrell said.

The Wildcats look forward to the playoffs after missing out a year ago.

“Coming in, many people didn’t think this would happen and felt it would be a rebuilding type year. The guys have really bought into everything we’re doing and have worked hard. It’s a credit to them and the assistant coaches who have been here. We’re really proud of our team who has accomplished a lot and would sure love to win a playoff game. Florala is a great place, and we’re glad to be here. You can’t have success without a supportive administration, too.”

Last week, Florala closed its regular season with a home loss to Brantley.

“Brantley is a good football team, and we got behind quickly. I thought we played harder and executed a little better in the second half. We take nothing away from what Brantley does and look forward to the playoffs now. We are happy with the way the guys have performed this year and rallied overall,” he said.

The winner will play Loachapoka or Keith in the second round next week.