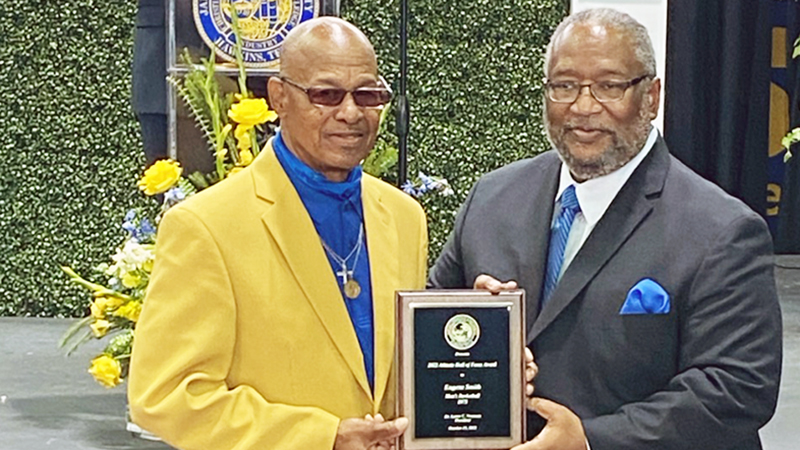 Smith was one of 10 new members inducted in Hawkins, Texas, during a luncheon honoring past athletes and coaches from across the university’s 110-year history.

“I was recruited to go to Grambling State University in Louisiana and went to Jarvis on a summer program. I met the baseball coach while I was there and decided to stay at Jarvis. I played shortstop during my first three years. My coach asked me to move to second base the last two years since there were scouts watching our team,” Smith said.

Originally from Mobile, he is a 1971 alumnus of Toulminville High School, now known as LeFlore Magnet High School. Smith then moved to Texas and attended JCU, where he graduated in 1975.

“I played Little League Baseball under Lewis Beck. My parents pushed me hard for me to receive my education because I was drafted in 1974. My parents forced me to stay in school, and I decided over the course of my last year I was done with baseball,” he said.

Smith added that it was an honor to be recognized by Jarvis Christian University.

“In a sense, it brought an end to my baseball career because I always had doubts. What if I had done this or that and signed a contract? When they adopted me into the Hall of Fame, it put an end to baseball, and I was able to say that I had made it.”

With his baseball-playing days behind him, Smith has since found a new passion for golf.

“I helped coach the golf team at Andalusia under Dale Anderson for a couple of years. Working with the kids was a great experience, and I really enjoyed doing that,” he said.

Smith is married to his wife, Pearlean, and they have two children: Jamal Smith and Andrea (Harold) Gray.

Jarvis Christian University, which was known as Jarvis Christian College from 1929 until May 2022, is a private historically black Christian university that was founded in 1912. Its athletic teams are known as the Bulldogs. For more information visit www.jarvis.edu.