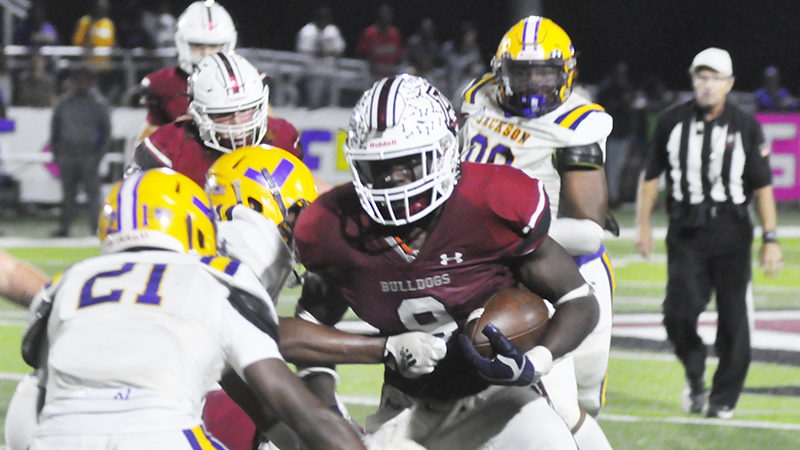 Andalusia battled in a hard-fought game from both ends and ground out a tough first-round win over Jackson, 25-10, at home Friday night. 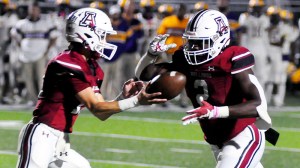 The Bulldogs improved to 10-1 overall and travel to American Christian (9-2) in Tuscaloosa for the second round Friday, Nov. 11, while the Aggies (8-3) ended their season.

“Jackson is a great football team, and I know a lot of people think it’s coaching talk, but that’s the best team in that region over there. Both teams played very hard tonight, and I’m proud of our kids. After an injury, the other guys just stepped up. There are a lot of good things up there (at American Christian), but maybe we can bring home a victory,” Head Coach Trent Taylor said.

The Bulldogs began the game with a 19-play, 70-yard drive that took nearly seven and a half minutes off the clock. J’Marion Burnette picked up two third-down conversions and pushed the ball into visiting territory. Jack Lathrop then threw a 31-yard strike to Kaden Denson for a first down inside the red zone. Burnette kept the drive alive with a fourth-down conversion, and a 30-yard field goal was good for a 3-0 lead. The Aggies did not fare well on their first drive as Kam Weaver intercepted a pass with 3:03 left in the first quarter.

Andalusia was unable to capitalize and turned the ball over on downs. Jackson earned one first down before the end of the quarter. Landon Duckworth had a first-down completion called back due to a holding penalty, and the offense had to punt. The Bulldogs used another strong drive and increased their lead to 10-0. Lathrop converted a fourth-and-4 with a 15-yard first-down pass to Tycamren Jackson. Lathrop then capped the five-minute drive with a 10-yard touchdown throw to Denson. Cobb Stewart added the PAT with 6:18 left in the first half. The Aggies broke through just before the half ended.

Duckworth converted a third-and-15 with a 42-yard pass to Tychius Caves at the home 7-yard-line. The defense held serve, but Jaramie Houston booted a 33-yard field goal as Jackson drew within 10-3. Andalusia drove down the field and reached the opposing 15 but missed a 32-yard field goal as time expired.

Caves began the second half with two runs of 11 yards and caught a 23-yard pass into Bulldog territory. Duckworth found Jared Merida open on a 29-yard touchdown pass as the Aggies tied the score at 10-10 with 7:58 left in the third. It was just 20 seconds later when Burnette rolled around the left side for a 75-yard run on the initial play of the half. Stewart’s point after took the score to 17-10.

Jackson fought back with another long drive that began with a 28-yard first-down pass. Faced with a second-and-33, Duckworth picked up 38 yards on two runs and gave his side a first down at the home 31. After a first-down conversion by Caves to the 20, the drive stalled as a 40-yard field goal went wide left. Andalusia took over and moved the chains twice a crucial fourth-and-4. Lathrop found Jackson open for 12 yards before Dorean Crittenden and Burnette closed out the quarter with three rushes.

Lathrop found Jackson open for a 6-yard completion on another fourth down to begin the final frame. The Bulldogs then were pushed back due to a couple of penalties and faced a second-and-37. Lathrop found Denson in the middle of the field in stride, and the 44-yard touchdown pass came with 9:44 to go in the game. Crittenden added the two-point conversion after a penalty for a 25-10 lead. The Aggies gained one first down before a turnover on downs on their next drive. Both teams traded turnovers as neither side scored again and the game ended.

Andalusia outgained Jackson 381 yards of total offense to 246. Lathrop was 10-of-22 passing for 169 yards and two touchdowns. Burnette powered the rushing attack with 31 carries for 156 yards and a score. Denson earned 109 yards on four receptions and two touchdowns. Crittenden and Jackson both paced the defense with 5.5 tackles each. Jacob Sellers, Garrett Blackston, and Weaver followed with five apiece.