Covington County’s unemployment rate continued its recent downtrend trend, based on statistics from the Alabama Department of Labor. 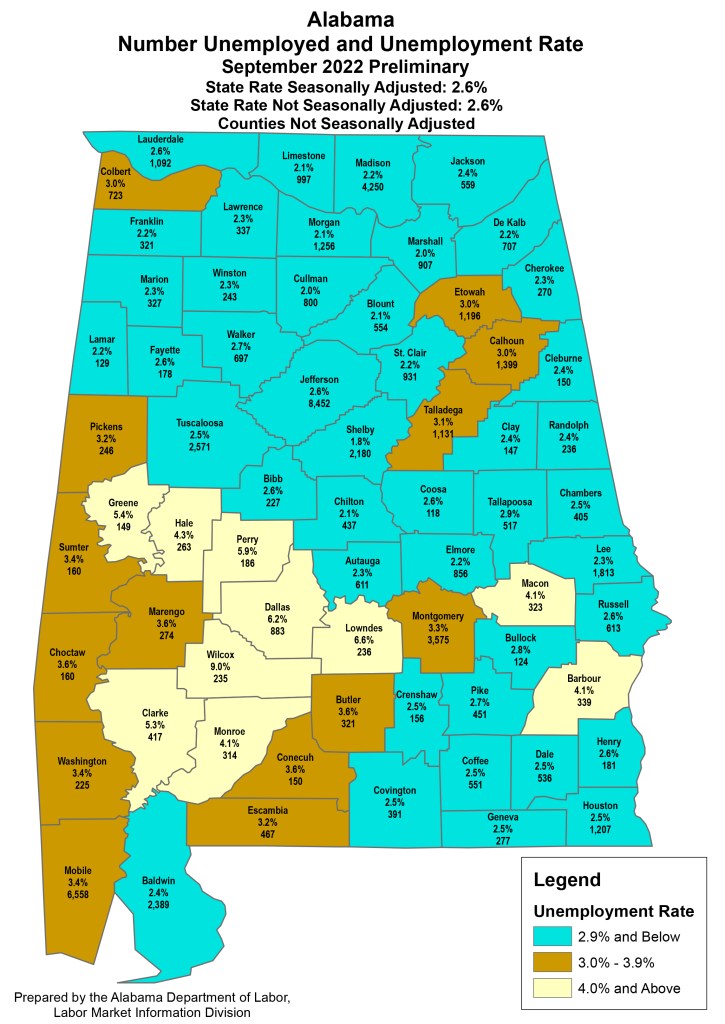 The county’s rate for September came in at 2.5 percent, down from August’s rate of 2.8, but the same from September 2021.

The civilian labor force in Covington County was calculated at 22,064 with employment at 21,513.

All unemployment rates reported are preliminary and seasonally adjusted.

Rates for neighboring Alabama counties include:

Butler County — 3.6 percent, down from August’s rate of 4.2 percent

Coffee County — 2.5 percent, down from August’s rate of 2.8 percent

Conecuh County — 3.6 percent, down from August’s rate of 4.1 percent

Crenshaw County — 2.5 percent, down from August’s rate of 2.9 percent

Geneva County — 2.5 percent, which did not change from August’s rate

“Despite the uncertainty facing the U.S. economy, Alabama has managed to add 50,000 new jobs since September of 2021 and is on pace to break its previous record for yearly job growth,” said Governor Kay Ivey. “Our efforts continue to yield encouraging results, and I’m looking forward to working with our public and private partners to make Alabama an even better place to live, work and raise a family.”

Over the year, wage and salary employment increased by 53,800, representing the largest year-to-date growth of 2.6 percent, with gains in the education and health services sector (+15,200), the professional and business services sector (+10,900) and the manufacturing sector (+7,800), among others.

“While we are, of course, happy to maintain a record low unemployment rate, we’re even more pleased to announce that we are within around 10,000 jobs of beating our previously held jobs count record — set in 2019 — and we saw the largest year-over-year job growth so far in 2022. We’ve added over 50,000 jobs since this time last year, which is remarkable,” said Alabama Department of Labor Secretary Fitzgerald Washington. “For months, Alabama has been holding steady on unemployment and increasing our jobs count, and we are hopeful this positive growth will continue.”

Average weekly wages increased to $1,007.07 in September, the second highest on record. This represents an over the year increase of $22.53, 2.3 percent growth. The Professional and Business Services Sector also reached a new record high for weekly wages, increasing to $1,342.04.

Counties with the lowest unemployment rates are: Shelby County at 1.8 percent, Marshall and Cullman counties at 2 percent, and Morgan, Limestone, Chilton, and Blount counties at 2.1 percent.

Major cities with the lowest unemployment rates are: Vestavia Hills at 1.5 percent, Homewood at 1.6 percent, and Trussville at 1.7 percent.

Major cities with the highest unemployment rates are: Selma at 7.3 percent, Prichard at 6 percent, and Anniston at 4.2 percent.