Rudd named 12 and under grand champion at IIKA Games 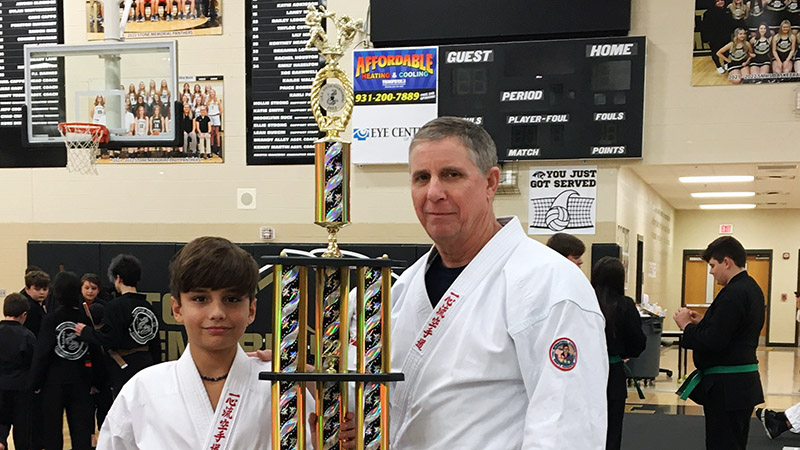 Johnathan Rudd, left, was named the 12 and under grand champion at the International Isshinryu Karate Association Youth Karate Games Saturday, Oct. 22. He is pictured with Mark Rudd. (SUBMITTED PHOTO)

The International Isshinryu Karate Association Youth Karate Games were held in Crossville, Tennessee, on Saturday, Oct. 22, with Johnathan Rudd named the 12 and under grand champion.

The tournament was hosted by the IIKA Board of Directors and is open to all IIKA Youth competitors 17 and under.

Rudd competed in the 11 and 12-year-old brown belt division and won first places in weapons, kata, and fighting. All first-place winners of kata and or weapons in kyu ranks (below black belt) compete for an overall winner or grand champion. Rudd won the grand championship in the 12 and under category.

The next competition for the Andalusia Isshinryu Karate team will be Saturday, Nov. 5, in Dothan at the Southern Region Open.

The International Isshin-ryu Karate Association was officially formed in December of 1974 in Knoxville, Tennessee. Notable Isshin-ryu practitioners from all over the United States were present at the meeting such as Harold Long from Knoxville, Harold Mitchum of Georgia, Ed Johnson of Texas, Don Bohan of North Carolina, Tom Lewis of Maryland, Harry Acklin of Ohio and John Bartusevics of California. Harold Mitchum made the motion that Harold Long be elected president of the association for a life term. Members present passed the motion. Additional seats were held on the board for Don Nagle of New Jersey, Steve Armstrong of Washington, and Jim (A.J.) Advincula of California, but the board was never fully assembled.

The IIKA Hall of Fame was established in 1979 but later disassociated with the IIKA so that it could become a universal Isshin-ryu activity. It has no association to any organization, and it has become “the world’s largest gathering of Isshin-ryu Karate-Ka.” The Hall of Fame remains the single best attempt to unite the Isshin-ryu world. The present board is made up of members with unparalleled experience and expertise in Isshin-ryu Karate.

Andalusia Isshinryu Karate offers instruction in Okinawan Isshinryu at its location beside USA Gym and Fitness Center. For more information, call or text 334-488-3104.