BROTHERS AT ARMS: Granger family has long tradition of serving their country in military 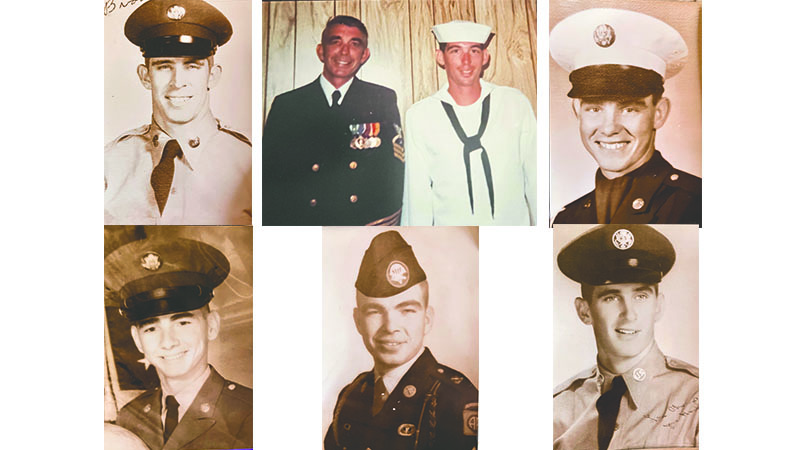 For a Harmony community resident, military service was not only a personal mission but also a family one as William “Judd” Granger is one of six brothers and 13 family members who served their country in the military.

Granger, 81, first donned a uniform during boot camp after joining the U.S. Navy. It was a tradition joined by his brothers: Bud, Sesh, Randall, Jack, and Larry, who joined the Army and Air Force; and his son, John, who followed in his Navy footsteps.

“I can honestly say that every Granger I ever knew, no matter how long they were in the military, served honorably and were never honorably discharged. I’m proud of the Granger name. I am thankful to be part of a military family and pay tribute to my brothers for Veterans Day this year,” he said.

Granger grew up in Plant City, Florida, and made his way to Covington County after marrying his wife of nearly 61 years, Glenda, who is originally from Dozier. Coincidentally, they celebrate their anniversary on Pearl Harbor and have lived in the Harmony community since 2003.

Granger, who completed boot camp in April 1960 and separated from the Navy in July 1979 as a Chief Gunner’s Mate Technician, said he joined the military because of his family.

“One of my uncles was in the Army during World War II and I used to visit him a lot. He was a quartermaster and drove the ships. I really became impressed about the stories he would tell and after visiting him one summer, I knew I wanted to become a Navy sailor. As soon as I got out of high school, I went down to the recruiter and signed up. While on a cruise one year, I had already made up my mind when I saw guided missiles, that’s where I was going to work. I was going to become a guided missile technician.”

Granger was presented with the Navy Commendation Medal in September 1971 for manning a machine gun to suppress enemy fire and render first aid to other victims when his boat came under fire in October 1970. For his wounds, Granger also received a Purple Heart in Washington D.C. two years later in October 1972. One of Granger’s letters praised his time and efforts in the military.

“GMG1 Granger exhibits excellent professionalism in his knowledge of advising the Vietnamese in the area of weapons and also reveals adequate knowledge in the areas of engineering and deck seamanship pertaining to river assault craft. He works well on his own and has good personal working relationship with his Vietnamese counterparts which is essential in his advisory capacity,” the letter stated.

Current service members or veterans will say one of the biggest draws of military service is an overwhelming sense of brotherhood. For Granger and his brothers, that was exactly the case. Along with his son, he was the only one of the six siblings to serve in the Navy.

“To me, you have to love the water if you are going to be in the Navy. If you’re afraid of the sea, you don’t need to be there. I loved the water and almost didn’t move to Alabama because of finding some land on the Florida coast, but the Lord sent me here. My wife being from Alabama was also a factor in that,” he said.

After serving six tours in Vietnam and spending 14 of his 20 years at sea, Granger went on to work for an engineering company. He completed 19 years of employment with Watson Engineering Company and 44 years total in the workplace. He received six letters of accommodation from different commanders.

“I believe freedom is the one thing we work so hard for. Without it, we really wouldn’t have an America. If I want to go get a passport to go to Europe, I’m allowed to do it without any questions. We also have freedom of speech and the freedom to own a weapon.”

He attributed always having a positive attitude to the present day due to the time he served.

“I don’t allow myself to get depressed because of the training I received and always keep my chin up. When we came home from Vietnam, we were required to come in civilian clothes. While on a bus in San Francisco, our bus driver pretended the bus was broken down and wanted us to miss our plane. We immediately hailed some cabs and made it to the airport. It was so bad back then we were spit on and had some spitballs thrown at us in the airport.”

He now spends his time doing woodworking, drawing, painting, and gardening. Granger and his wife, Glenda, have two grandchildren and three great-grandchildren.