Bulldogs travel to Tuscaloosa to face American Christian in round two 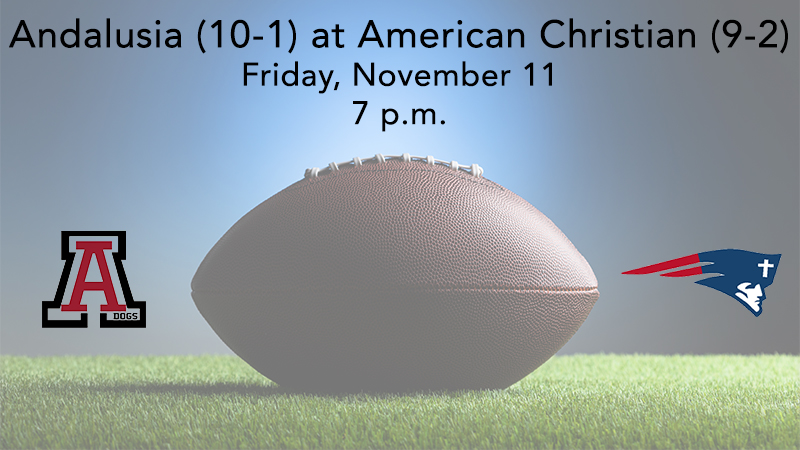 After clearing a first-round hurdle last week, Andalusia (10-1) heads to Tuscaloosa for a battle with American Christian (9-2) in the second round of the 4A state playoffs Friday, Nov. 11, at 7 p.m.

This contest will only be the second meeting between the two teams after the Bulldogs earned a 24-0 home shutout over the Patriots in the quarterfinals in 2019.

“We haven’t really watched American Christian much except from film Saturday. They’re still a spread attack, and from the last time we played them, I see a lot of similarities. They spread you out and certainly want to run the football. The quarterback looks to be a really accurate passer and is also a runner. That’s what makes them different from when they came down here and played us. They have an up and coming tradition over there and have been very successful in their time with the AHSAA. They’re a prideful bunch and will play hard,” Head Coach Trent Taylor said.

Despite going up against another tough opponent, Taylor added that it is still about his team.

“We are working on making Andalusia better and taking care of us. We will put in a game plan Friday night that best suits what our guys are capable of doing. We had a lot of guys on both offense and defense banged up last week, but that’s playoff football. We still have to prepare for our next opponent and hope the physicality of the team is where you want it to be.”

He was proud of the Bulldogs for the effort they gave against Jackson.

“We had a good first half and had to kick a field goal on our first drive. A penalty backed us up after we got inside the 2-yard-line, but I was proud of senior Cason Clark who made the first field goal of his career. I was disappointed with the penalty but glad we were able to get points. It was a big kick and hopefully will give him a lot of confidence in the playoffs. To hold Jackson to only three points in the first half was a great job by our defense. They took the second half kickoff and went down to tie the game at 10-10. You never know how your team is going to react in what had been a really stingy defense all night long against the rush. J’Marion (Burnette) scored 75 yards on the first play after they had scored, and I think that gave us the momentum back. Defensively, our guys had their backs against the wall several times, but it was one of those situations where we bent but didn’t break. Jack (Lathrop) and Kaden (Denson) were able to connect there in the fourth quarter, and a penalty allowed us to go for two after the touchdown,” Taylor said.

According to Taylor, Andalusia encountered some sickness leading up to the first-round game.

“It was a tough week for us with a lot of flu and strep throat throughout the week. Some guys were missing practice or either sent home from practice, so we wouldn’t expose everybody else. The fact that they were able to keep focused with all that around them says a lot about them. Jackson is a young football team and going to be really good in the years to come.”

The winner will play Anniston or B.T. Washington in the quarterfinals next week.