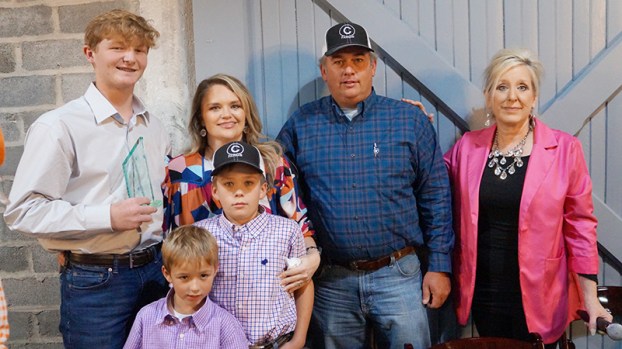 Recipient of the J.W. Clark Memorial Future Farmer of the Year Award, Baylor Turman. He is pictured with his family, from left, Baylor Turman, Kristee and Chad Clark and family, and Kelly M. Brandin (presenter). (ALL PHOTOS COURTESY OF OPP CHAMBER OF COMMERCE) 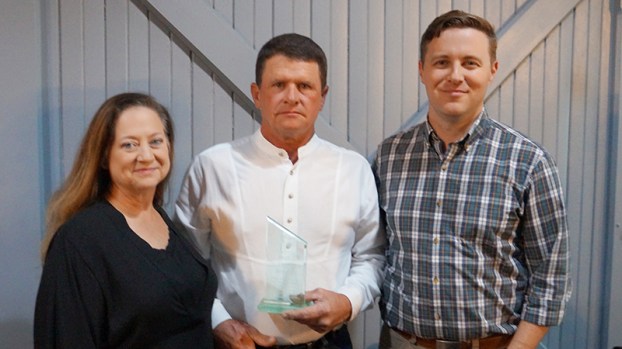 Recipients of the Poultry Award are Don and Ava Morrow. The award was presented by Ryan Richburg of Wayne Farms, pictured on the right. 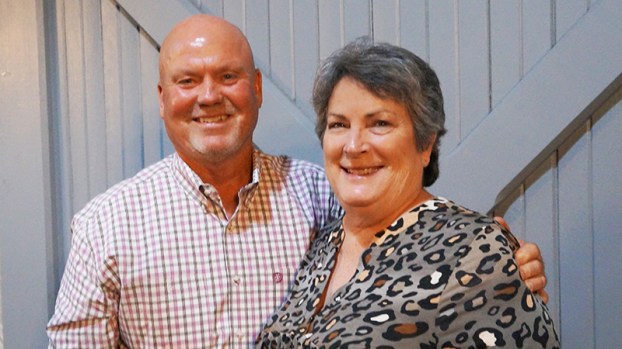 Wyatt and Frances Sasser are the recipients of the 2022 Cattle Farmer of the Year. 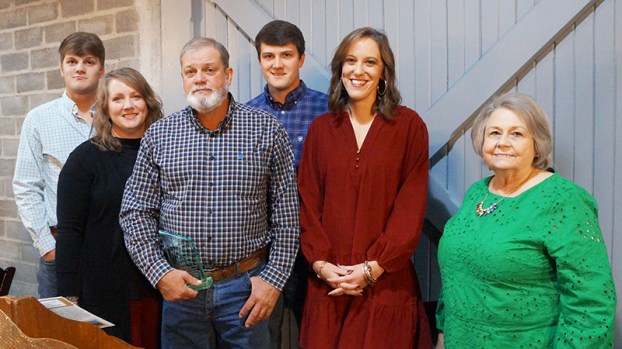 Recipient of the Row Crop Farmer of the Year Award Ashley Kelley with his wife, Sandra, and their family. 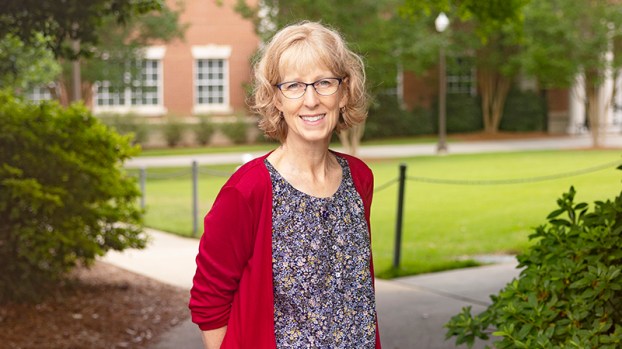 Dr. Becky Barlow was the keynote speaker at the Covington County Farmers’ Banquet. 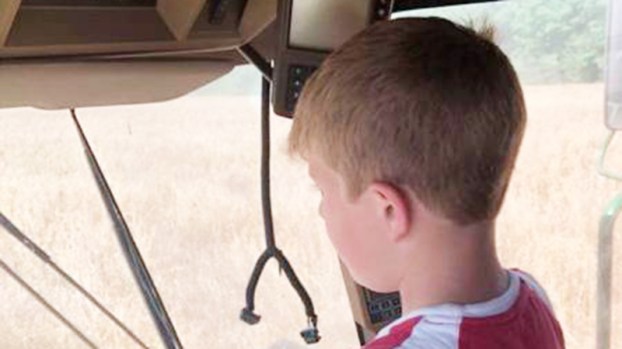 J.W. Clark for whom the J.W. Clark Memorial Future Farmer of the Year is named.

The Opp Chamber of Commerce hosted its annual Covington County Farmers’ Banquet on Thursday, Nov. 3, at the Opp Depot to honor local farmers.

Keynote speaker for the event was Dr. Rebecca J. (Becky) Barlow, a 2005 graduate of Mississippi State University where she received her Ph. D. in Forest Management and a minor in Wildlife Biology.

Between the years of 1994 and 2006, she was also a forester with Weyerhaeuser Company in the Mississippi/Alabama region. For 15 years, she served as an Alabama Cooperative Extension System Specialist and Professor in the College of Forestry, Wildlife, and Environment at Auburn University, where she assisted private forest landowners in the management of their property for multiple uses including traditional forest management, silvopasture, non-timber forest products, and forest aesthetics. In addition, she also taught several courses in forest measurements and land management basics in Auburn University’s School of Forestry and Wildlife Sciences. Since June 2022, she has served at the Assistant Director for Ag, Forestry, and Natural Resource programs within the Alabama Extension System, and Associate Dean for Extension within Auburn University’s College of Agriculture.

Recipients of this year’s awards include the following:

Poultry Farmer of the Year — Don and Ava Morrow

Don was born in Opp to Larry and Lynne Morrow.  He attended Opp City Schools and graduated in 1984. He then attended LBW Junior College in Andalusia for two years. He worked for Wayne Farms for 21 years. In 2007, while still working for Wayne Farms, he built his first poultry houses. In 2013, he decided to build more poultry houses and retired from Wayne Farms. His last poultry house was built in 2019, making a total of eight houses.

Ava was born in Mobile to Chester and Shirley Carlisle.  Her family moved to Opp when she was 3 years old. Ava also attended Opp City Schools (Class of 1987), where she and Don met. After high school, Ava also attended LBW Junior College in Andalusia. From there, she attended Wallace College in Midland City, Alabama, and the University of South Alabama in Mobile.  She completed her education with a bachelor’s degree in nursing, and served as the administrator for four different long-term care facilities.  After 25 years, she decided to retire from long-term care and is now a surgical nurse at a hospital.

Don and Ava have two sons.  Their eldest son, Drew Morrow, is a nurse anesthetist in New York City. Drake Morrow, aside from being a fellow poultry farmer, is a licensed livestock auctioneer. Drake and his wife, Lauren, have three daughters: Nora, Aria, and Alexa.

Cattle Farmer of the Year — Wyatt and Frances Sasser

Wyatt is married to his high school sweetheart, Frances Sasser, and they have been married for almost 41 years. Wyatt and Frances have three children: Candace (Daniel) Tucker, Calvin (Emily) Sasser, and Cristin (Michael) Murphy. They have nine grandchildren.

When Wyatt is not working construction, you can find him with his family or tending to his cattle. Wyatt has been in the cattle business for over 20 years, and has grown his herd to around 200 head of commercial cattle.  He has been a member of the Covington County Cattlemen’s Association since 2012 and served as the Covington County President from 2018 to 2020. Wyatt is presently serving as the regional vice president for the Alabama Cattlemen’s Association. As regional vice president, he serves Covington, Conecuh, Escambia, Wilcox, and Monroe counties.

In addition to construction and farming, Wyatt is an active member of Mt. Gilead Baptist Church.  He has served as a deacon and has taught Sunday School for third, fourth, and fifth grade for 15 years.

Ashley Kelley is a third-generation farmer from the Carolina Community. He is the son of Gwen Kelley and the late Wayne Kelley.  He has been married to his wife, Sandra, for 28 years.  They have three children: a daughter, Sara Beth, who is a first grade teacher at Straughn Elementary; two sons, Mason and Landon, who are partners in the farm; and a soon-to-be daughter-in-law, Riley Grace Lowery, who will officially join the family when she and Mason are married in December.  Ashley and his family attend Carolina Baptist Church, where he serves as a deacon.

Ashley has “tried his hand” at a few other professions over the years but always came back to farming. He said he is proud to follow in his father’s footsteps and hopes to pass on the legacy of farming to his sons, Mason and Landon, who joined him full-time on the farm this year. Together, they farm 2,000 acres of cotton, 500 acres of peanuts, and a few acres of corn and oats.

Baylor Blackstock Turman is a 15–year-old freshman at Opp High School.  He is the son of Stephen and Susan Turman. Baylor not only enjoys his agricultural pursuits, he also plays football and baseball for Opp High School. He is the Student Government Association’s reporter and a member of the National FFA Organization. Baylor enjoys hunting, fishing, and playing travel ball for teams in Auburn and Dothan. He is a member of First Baptist Church in Opp.

Farming goes back seven generations on Baylor’s maternal side of the family.  His major agricultural influence remains his paternal grandfather, Tommy Blackstock, who has been a farmer for over 70 years.  Baylor hopes to pursue a degree in nutritional science with a minor in animal science.

Baylor said he is honored to be receiving the Future Farmer of the Year award, in memory of J. W. Clark.  He, just as J.W. Clark did, possesses a sincere love for farming and agriculture.