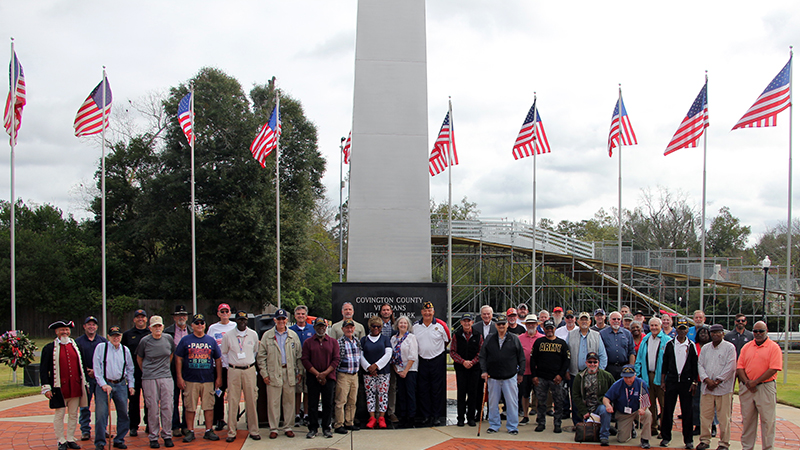 The Andalusia Area Chamber of Commerce and City of Andalusia united as one and recognized veterans for their service with a parade and ceremony Friday morning. 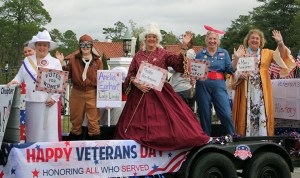 Members of the Three Notch Chapter of the Daughters of the American Revolution wave to the crowd along the Veterans Day parade route.

The Chamber hosted its annual Veterans Day Parade, which began at 3rd Avenue and ended at Andalusia City Hall with a ceremony at the Covington County Veterans Memorial Park.

“We had a wonderful turnout for our parade. Thank you to all our veterans who rode in the parade, our Grand Marshal Mike Edwards, all of our parade entries, our board of directors, and all that made it happen. Thank you to all our veterans and active service men and women. We are so grateful to our Covington County veterans for their service. We love being able to show our support and appreciation to them with our annual parade and can never thank them enough for all they have done to fight for our freedom,” AACC Executive Director Laura Wells said. 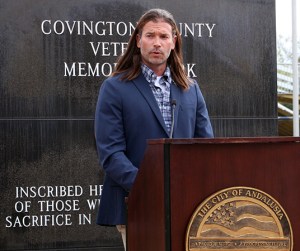 “We are blessed to live in a patriotic community among many who not only answered that call but volunteered to serve. So many organizations work together to show their appreciation for that service,” City of Andalusia Mayor Earl Johnson said.

Edwards is the founder of Project Exodus Relief, which works to assist American citizens and Afghan SOF soldiers left behind after the United States’ withdrawal from Afghanistan. 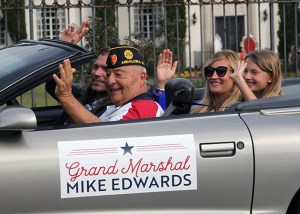 Veteran Mike Edwards was the grand marshal of the parade.

“I speak to people all over the country, and this was the most important one to me. I was honored to be able to speak to our friends and family and the local veterans. We’re not from here, but this has become like home to us. It means more to me than any other speech I’ve done,” he said.

He began his professional military career attending Marion Military Institute where he excelled at military science while assigned to the ROTC program. After his second year, he decided he would withdraw from school before being commissioned and enlisted in the Army with the intent to serve in a Special Operations unit.

“I enjoyed my time in the military and would not change it for the world even though my body is a little beat up from it. I think it was the right thing to do, and the military set me up for success and helping people get out of Afghanistan.” 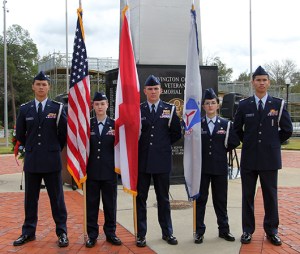 Edwards served three years in the conventional Army and was stationed in Korea when the Sept. 11 attacks transpired in 2001. At that time, he re-enlisted for service with the 75th Ranger Regiment and served as rifleman, fire team leader, and an assault squad leader on several combat deployments.

“Freedom means not being imposed a bunch of garbage restrictions on people like some members of the government are trying to do now. They are supposed to provide a service for us and not tell us what we’re supposed to do. I feel our freedom is being infringed upon in this country right now,” he said.

His speech discussed what it means to be a veteran and the contributions each offers the community.

“Being a veteran at some point in your life means pushing yourself to new limits. You’re willing to write a blank check to the United States of America for up to and including your life. According to the VA, only seven percent of Americans are veterans. Of that demographic, less than 20 percent have served in combat. This is a very elite group, so thank you all for your service. Veterans have big hearts and want to give back to their communities. We love this country, and our oath is to protect enemies both foreign and domestic. I believe one of our issues is domestic issues.”

Edwards and his wife, Kendall, are the proud parents of one daughter, Annaleigh.

“My family gets the hard end of the deal. I’m over there busy with work, so it doesn’t really affect me that much. They are back home worried and can’t talk to me a lot of the time since I can’t call home,” he said.

He was wounded during a battle in Tal-Afar Iraq in 2005 where he received the Purple Heart Medal and the Silver Star Medal. He has commanded a fighting force of as many as 700 fighters as the senior U.S. advisor. He was promoted to Master Sergeant in 2011 and assumed the position of mortar platoon sergeant for 3rd Ranger Battalion in mid-2013. He became the Detachment NCOIC of the Free Fall Parachutist course, the NCOIC of the Jump Master course, and taught at the Instructor Course in Yuma, Arizona, in 2015 before retirement in March 2019.

“I am proud to be an American for these people we have here. These good people will do anything for anybody and love this country. There are so many people who would give their lives for it and many others in this country who didn’t even serve in the military,” Edwards said.

Edwards, who participated in 18 combat deployments, is a lifetime member of the U.S. Army Ranger Association and has been nominated for the Ranger Hall of Fame.