Bulldogs head to Anniston for tough road test in quarterfinals 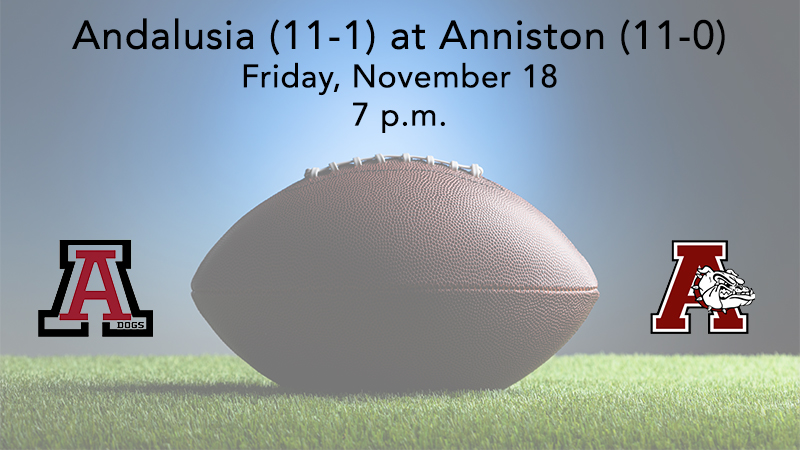 Following wins in the first two rounds, Andalusia (11-1) looks to replicate that success with a long trip to Anniston (11-0) in the quarterfinal round of the 4A state playoffs Friday, Nov. 18, at 7 p.m.

“Anniston is a very talented 11-0 football team who won their region. They beat two very good teams in Handley and Jacksonville in what people state is the best region in 4A football. They have an offensive lineman committed to Alabama, and their quarterback is committed to South Carolina as a tight end. He is 6’4 and 225 with several guys around him who can run well. It will be a challenge for our guys, and we’re happy to still be playing at this point,” Head Coach Trent Taylor said.

He felt the Bulldogs started out fast but were a little sloppy in their second-round win.

“Defensively, I thought we played really well all night long and made them one-dimensional. American Christian had a tough time running the football. Any time you can dictate what a team is doing, that gives you a better opportunity to be successful. There are still some things we need to work on, and I thought we played a little sloppy after we took the lead. We had a couple of turnovers and almost allowed them to get back in the game, but I was proud of our guys. They never panicked and stayed the course to get the win at the end.”

One of those plays came when American Christian made an interception and reached the 1-yard line but could not score.

“That was a really, really big play and probably the turning point of the game. They could have taken a 14-13 lead, but we made a couple of stops before a penalty backed them up. They attempted a field goal and came up short. We were able to hold on to a 13-7 lead, and they didn’t threaten the rest of the night,” he said.

Taylor stated it was great to see fans support the team at ACA. “I was late getting on to the field, and our guys were already running down the sideline as the guys were going out for the coin toss. You hear the band playing, and people in the stands were going crazy, which is huge. When you’re able to go onto an opponent’s field and your crowd is more boisterous and more active than the other crowd, you feel like you’re at home.”

The winner will play Montgomery Catholic or Handley in the semifinals next week.