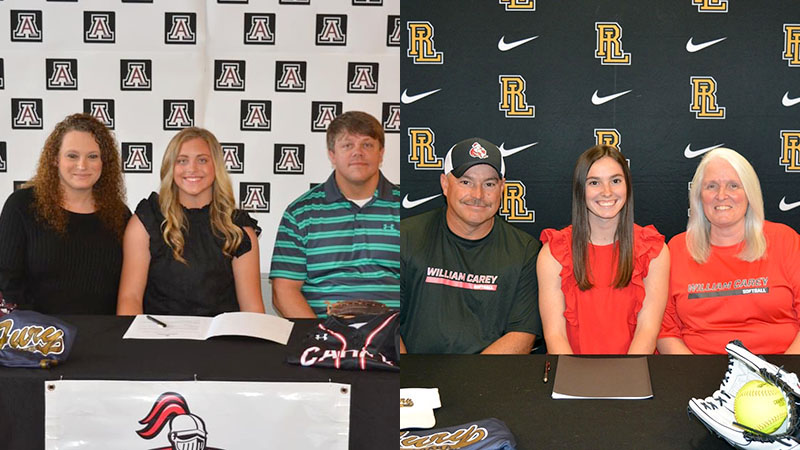 Elizabeth “Liz” Cross and Ashlee Findley have played softball since they were young and will continue the game they love after both signed with William Carey University Thursday, Nov. 10.

WCU is a private Christian four-year university located in Hattiesburg, Mississippi. Its athletic teams are known as the Crusaders. The university is a member of the Southern States Athletic Conference (SSAC) in the National Association of Intercollegiate Athletics (NAIA).

Cross is a senior pitcher and center fielder for Red Level School, and Findley is a third baseman at Andalusia High School. Both have played since they were four years old. “I’ve dreamed about playing softball in college since I was a little girl,” Cross said. “I’m very grateful to continue my softball career into college because it has been a dream of mine, and I look forward to playing at William Carey,” Findley added.

Although both will be a few hours away from home, they are looking forward to taking their talents to the next level.

“William Carey felt like home, and I fell in love with the campus when I stepped on it. The people there made it really feel like home, and I’m excited to see where this opportunity takes me,” Cross stated. “When I was visiting William Carey and walking through the campus, it felt very homey to me. I think I’m going to really enjoy the people and the coaches there,” Findley said.

Cross added that she would miss playing softball for Red Level but is excited about taking the field with the Crusaders. “I look forward to making many memories in college and meeting a lot of new people to make new friends. I am excited to continue playing softball because it means the world to me.”

Findley said she would treasure the years she has played softball at Andalusia and is thankful for a chance to continue the sport she is passionate about. “I’m excited about making some new friends, furthering my education, and getting to play softball. Growing up around the game means a lot. Getting the opportunity to play in college is the world to me.”

Cross plans to major in Physical Therapy. “I would like to get a good job and be happy with it,” she said.

Findley plans to go a different route and obtain a degree in Business. “I would like to get my MBA and further that into sports marketing. I want to work specifically around sports,” she added.

Cross shared feelings of being a Lady Tiger and how her high school experiences have prepared her for William Carey. “Since Red Level is such a small school, I’ve always had to push myself even harder. It allows me to take what I have learned here and gives me an opportunity to play in college while I work towards my degree.”

Findley felt the same way about her time as a Lady Bulldog. “Andalusia has prepared me for the future, especially on the softball field. We’ve always had a good softball team with a great group of girls. I feel like that will help me to continue being a great teammate at William Carey.”

Both girls expressed gratitude to their family and friends for being loyal supporters.

“It means the world having everybody there who has your back. If you have a bad day, there’s always someone there to pick you up. Having great teammates alongside you and a family who loves and cares about you is the world,” Findley said. “Having their support means everything to me. Playing on the field and looking in the stands to see someone there supporting you is great,” Cross added.

Despite playing at opposing high schools, they have played travel ball together since the age of eight. “It’s wonderful getting to continue playing softball with Liz, and she will also get to be my roommate,” Findley said. “Playing with Ashlee has been great, and she’s like my sister,” Cross stated.