Covington County’s unemployment rate for October showed a slight decrease from the previous month, according to the Alabama Department of Labor. 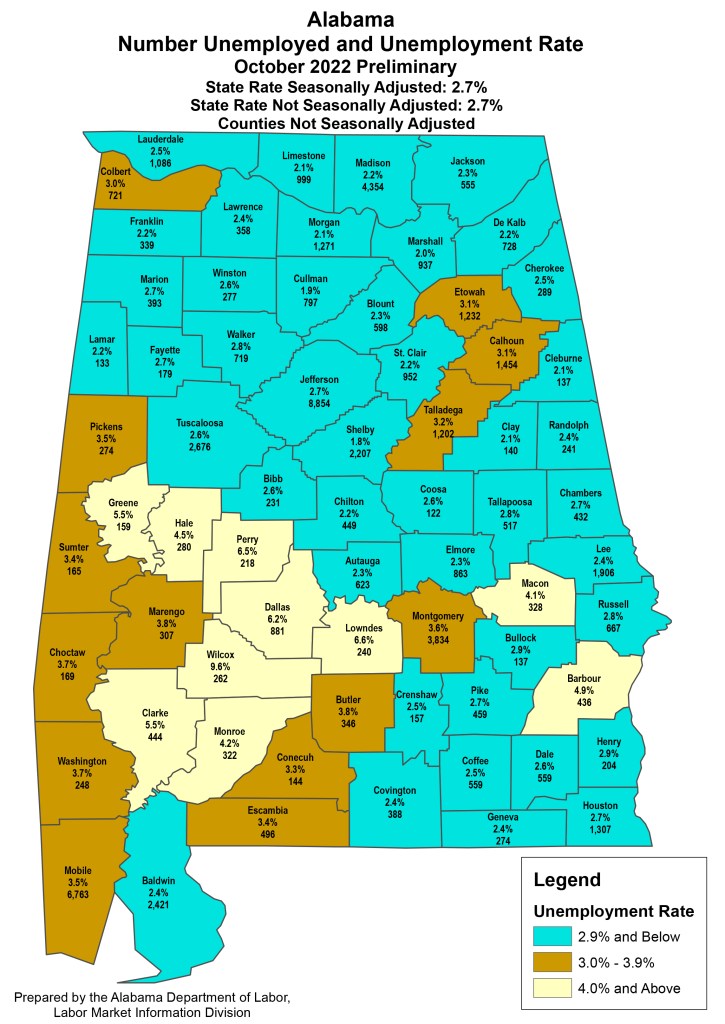 Statewide, the preliminary, seasonally adjusted unemployment rate for October was 2.7 percent, an increase from September’s rate of 2.6 percent and below October 2021’s rate of 3.1 percent. October’s state rate represents 61,760 unemployed persons, down from 70,569 in October 2021.

“Despite the challenging economic climate nationally, Alabama continues holding steady. At 2.7 percent, we are now supporting more jobs than at any point in our state’s history,” said Governor Kay Ivey. “Our wages continue to move in the right direction, more world-leading firms are relocating here every day, and our workforce development efforts are producing newly credentialed workers almost every day. It’s more than apparent that we have much to be thankful for as we head into the holiday season.”

Over the year, wage and salary employment increased 46,600, with gains in the education and health services sector (+11,700), the professional and business services sector (+9,500) and the manufacturing sector (+6,800), among others.

Wage and salary employment increased in October by 17,100. Monthly gains were seen in the professional and business services sector (+3,900), the government sector (+3,600) and the trade, transportation and utilities sector (+2,600), among others.

“Alabama experienced remarkable job growth, both over the month and over the year, in October,” said Alabama Department of Labor Secretary Fitzgerald Washington. “This growth actually set a brand-new record in Alabama for how many jobs our economy is supporting. We have nearly 47,000 more jobs now than we did last year. That’s extremely encouraging.”

Wages in the construction industry, the trade, transportation and utilities industry, as well as the professional and business services industry saw new record highs in October.

Alabama counties with the lowest unemployment rates are: Shelby County at 1.8 percent, Cullman County at 1.9 percent and Marshall County at 2 percent.

Counties with the highest unemployment rates are: Wilcox County at 9.6 percent, Lowndes County at 6.6 percent and Perry County at 6.5 percent.

Major cities with the lowest unemployment rates are: Homewood at 1.6 percent, Vestavia Hills and Trussville at 1.7 percent and Alabaster and Madison at 1.8 percent.

Major cities with the highest unemployment rates are: Selma at 7.2 percent, Prichard at 6.5 percent, and Anniston, Gadsden and Bessemer at 4.4 percent.