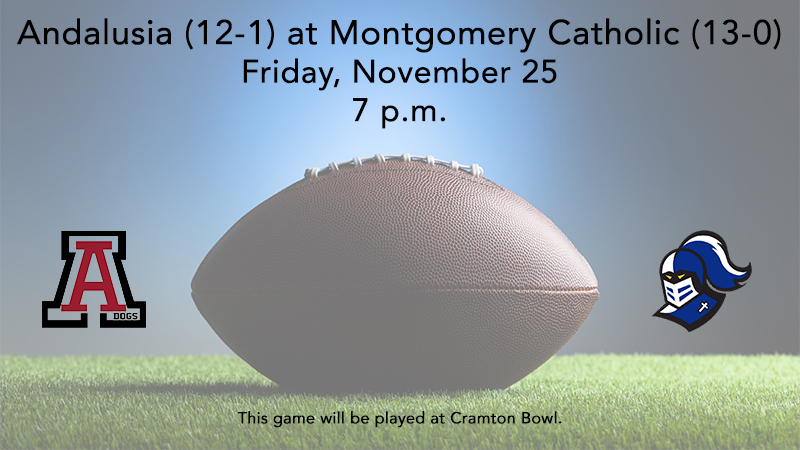 After a thrilling quarterfinal win, Andalusia (12-1) turns attention to a rematch against region champion Montgomery Catholic (13-0) at Cramton Bowl in the 4A semi-finals Friday, Nov. 25, at 7 p.m.

The two teams meet for the fourth time and their second game this season. The Bulldogs hold a 2-1 lead over the Knights in the series.

“We have been there and played Montgomery Catholic. We know what we are up against, which is a positive and negative. To be honest, going to Montgomery is going to be like going across the street compared to where we have been the last two weeks. Playing at a venue like Cramton Bowl will be nice, but once it kicks off, it’s still a football field,” Head Coach Trent Taylor said.

He does not see anything different about Catholic since the first matchup a month ago.

“We had the week off after that game and have now played three weeks. Once you get into the playoffs, it’s amazing to see how different teams are from probably week 7 on. When you see them this late, it makes a tremendous difference because you’re playing with more confidence. We had a good half of football against them, and unfortunately, it didn’t last in the second half. We will continue to do the things that have allowed us to have success this year. Maybe this time, it turns out better for Andalusia.”

Andalusia will make its sixth semi-final appearance in eight seasons under Taylor.

“It says a lot about our assistant coaches here who work tirelessly. It’s a grateful grind and also about our community and the kids. If you don’t do what you need to do starting in week 1, then you can put yourself in a bad situation for the playoffs. While it’s great to reach this point, we know the ultimate goal is still out there. We have to focus on us and be prepared for each opponent. There’s nothing better than getting up early Thanksgiving morning for practice and then watching football. While it’s a worthy goal, that’s not the end goal. There is no doubt our guys will go out and give a great effort,” he said.

Taylor referred to the quarterfinal game as the greatest comeback in program history.

“We didn’t play very well in the first half, and Anniston had a whole lot to do with that. We have had some really long drives in the last two weeks, but that’s playoff football in the South no matter what classification you’re in. It’s the luck of the draw some years whether you’re at home or on the road. Anniston had a really good football team with tremendous athletes at many different positions. Our mantra all year has been to play the next play, and I told them that at halftime. I’m proud of our kids and feel like we learned a lot, not just about athletics but life in general. We had some things go our way but have to put all that behind us. You enjoy it in the moment and move on to without a doubt the most talented team in 4A football.”

Tickets are $12 plus a processing fee and must be purchased through GoFan.

The winner will play Cherokee County or Oneonta in the 4A state championship game at Auburn’s Jordan-Hare Stadium Friday, Dec. 2, at 11 a.m.