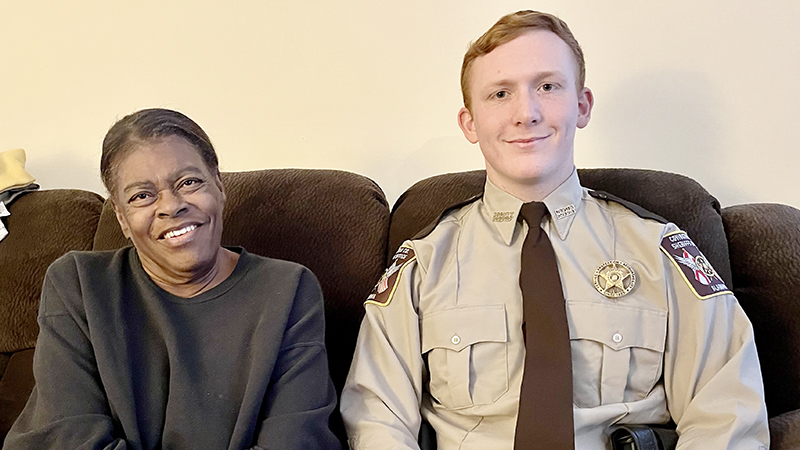 Covington County Sheriff’s Deputy Kaleb Piland was in the right place at the right time when he came to Dorothy Burnette’s aid upon returning home late one evening.

He received word that 71-year-old Burnette, his downstairs neighbor at Magnolia Court Apartments, was experiencing difficulties with her heart Monday, Nov. 14, at approximately 11 p.m. Piland was off-duty from the Covington County Sheriff’s Office that night and had not been at his apartment long when he sprung into action.

“My girlfriend and I had just gotten home from her pool tournament in Crestview. After relaxing on the couch to watch a movie in the living room, we heard a commotion downstairs from somebody knocking on her door but didn’t think much of it since it’s a busy complex. A neighbor across from us came beating on my door and said Mrs. Dorothy could not breathe or even get to the door. Her breathing machine wasn’t hooked up, and her heart rate was extremely high. My thoughts were, ‘I have to get into this apartment and help her.’ I tried talking to her through the door, but she was very faint and stuttered she couldn’t breathe. At that point, I kicked in the door, helped her begin breathing, and hooked her up to her oxygen machine. I called Advanced EMS to come and take her to the hospital,” Piland said.

Burnette thought she was having a heart attack and remained in the hospital until last Friday.

“I was short of breath and couldn’t get to my oxygen or make it to the front door. That’s when I called my neighbor Faye to come over here and try to get in. When she couldn’t, she ran upstairs and got Deputy Piland. He came down and couldn’t get inside, so he told me to move back from the door. I told him I’m not at the door because I can’t move. He then kicked it in and came to save me. My heart was running away, and when they got me out to the hospital, the guys said I had changed color. They calmed me down at the hospital and told me my color was coming back. Everybody came through for me and saved my life,” she said.

She stated Piland’s heroic actions meant a lot to her.

“I didn’t care about anybody breaking that door in as long as they were saving my life. That’s the most important thing. It’s good to have people in your life like that. He wasn’t scared, but I was because that was the first time I’ve ever had something going on where I felt like that. When I was growing up, we had people like that where our neighbors were neighbors. Now, I see the same thing happening sometimes. Deputy Piland has a big heart and really cares about people.”

This was the second incident where Piland came to her rescue. “I fell going into the kitchen in August and fractured my right foot really badly. I spent 21 days in the nursing home for rehab and got out in September. My kitchen also caught on fire around the same time,” Burnette said.

Piland added how grateful he was to save Burnette’s life. “All life is precious, and I would do anything in my power to assure the safety of anyone. I would put anyone’s life before my own to ensure he or she is safe. It means the world to me even though I was off-duty. I’m grateful I was in the right place at the right time.”

A 2020 alumnus of Pleasant Home, Piland has been in law enforcement for over a year and became a sheriff’s deputy three months ago.

“I moved to the Covington County Sheriff’s Office from the Andalusia Police Department because I wanted to be able to reach and help a wider variety of people. I was also attracted to the great atmosphere that the CCSO provides. It’s an honor to work for Sheriff Blake Turman, and I’m extremely grateful for the amazing opportunities he’s provided for me to properly safeguard the citizens of Covington County,” he said.