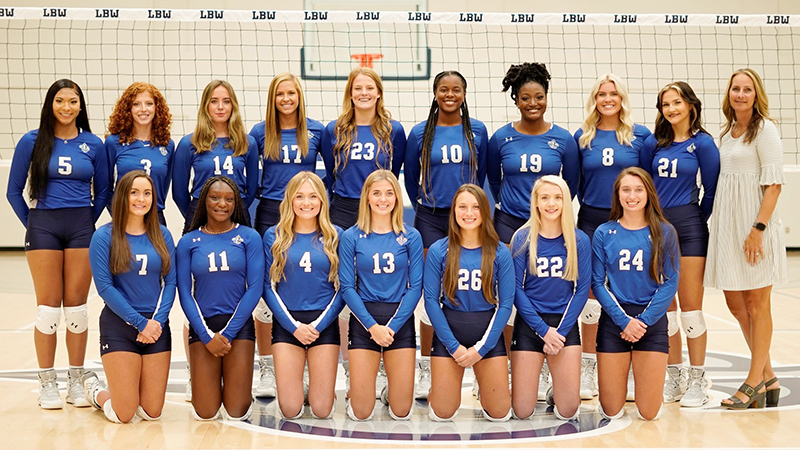 The LBW volleyball team had a successful second season and reached the postseason for the first time in program history under ACCC Coach of the Year Janie Wiggins.

“We had an amazing season, and this would not have been possible without the incredible amount of work this team has put in since the end of last season. They worked hard in the spring and throughout the summer. The girls took summer workouts seriously and reported in shape,” Wiggins said.

She expressed her gratitude for the opportunity to lead the Saints volleyball program. “LBW is a family. I have enjoyed the opportunity to bring in players and watch them transform from strangers to family. It’s truly amazing how close this team has become and is because becoming a family was a priority.”

LBW began the season with four consecutive five-set matches and went 3-2 in August. The team alternated wins and losses through the first six contests of September. After falling to Coastal-South and Wallace-Hanceville, the team won three straight before losses to Pearl River and Pensacola State. The Saints then went on a tear and won eight in a row, including a 3-2 upset win over conference champion Wallace-Hanceville Thursday, Oct. 6 at home.

The team capped a 19-15 regular season with a 1-3 showing at a tournament in Palatka, Florida. LBW entered the NJCAA Gulf Atlantic District Tournament as the sixth seed and came up short to Monroe College in the first match. The Saints staved off elimination with a 3-1 win over Coastal-East but ended the season with a 3-0 loss to Coastal-South. The Saints competed in 14 five-set matches this year and finished with a 7-7 record in those contests.

“It was a hard-fought battle to make it to the postseason. We took so many teams to five sets. Early in the season, we struggled to find a way to win those battles. I feel like we learned from those matches we lost, and it encouraged them to fight and outwork the other team. This team was always willing to listen to work hard and get better. Making the postseason was this season’s goal, and our goal for next year is the final four,” she said.

According to Wiggins, the team learned many life lessons throughout the year.

“They learned life is hard, and things don’t always go your way. Despite that, they realized they couldn’t give up and had to work harder while leaning on their teammates. It’s not always about winning but more about the development of lifelong friendships.”

LBW looks to build off this season’s success and prepare for the program’s third year in the fall of 2023.

“I believe this team saw the importance of team chemistry and hard work. We will have another tough season as we face great competition in our conference. We have work to do in the spring that I believe will help us be stronger in the fall.”

During the district tournament in Mobile, Wiggins was announced as the Alabama Community College Conference Coach of the Year. “I was truly honored to receive this award, which is voted on by the coaches in the conference. All of the ACCC coaches pour their heart and soul into their programs, and I have so much respect for them. I still can’t wrap myself around it but am so appreciative,” she said.

Two sophomores also earned conference accolades at the end of the season. Setter Maddie Rasmussen was named to the 2022 All-ACCC First Team and All-Tournament Team, while middle hitter Brianna Wilson earned a spot on the Second Team.