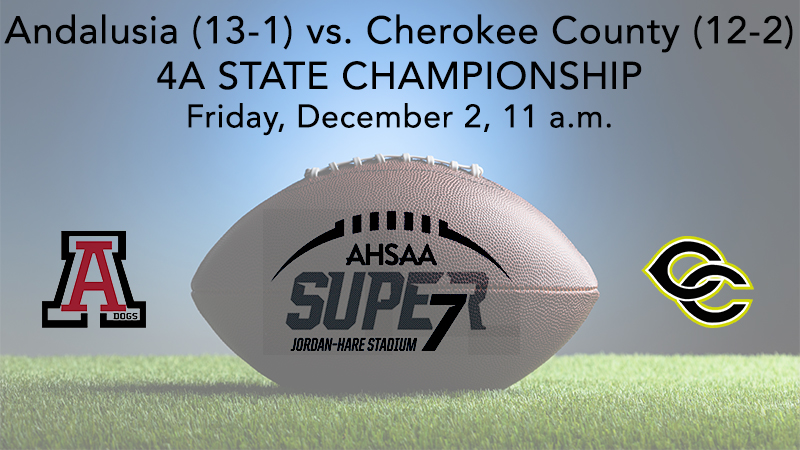 There will be a “Bulldog Walk” prior to the game at 9:15 a.m. This event will be similar to Auburn’s game-day “Tiger Walk” tradition.

The two teams will meet in only their second all-time meeting. The Bulldogs won a home semi-final game over the Warriors, 21-0, in 1973. Andalusia is 1-2-1 in the final round of the playoffs with all four prior games coming during the 1970s. Cherokee County is 1-3 with games in 1984 and three during the 2000s.

“Reaching the Super 7 is the ultimate goal. I don’t think there’s a team in August that doesn’t have that as a goal or a dream. It’s what you aspire for, and I’m super excited for our kids and the community, especially with us being so close for a number of years. Every team can work on certain aspects of their game, but the one thing you never know is how a team is going to respond to adversity. We had a lot of mental toughness these last few weeks to get here. These young men have responded to it in a way I’d be lying to you if I weren’t surprised by it. We’re excited to be here but have to keep everything in perspective. We will enjoy it certainly but not get caught up in everything around it that is going on,” Head Coach Trent Taylor said.

Taylor will coach in his first state championship game after playing in Andalusia’s previous title contest during the 1977 season. Coincidentally, that game was also held on Friday, Dec. 2.

“Being able to be at home and go brings a uniqueness. It’s probably different than anything else. You sit around and dream of this opportunity but have never been able to get over that hump. The most enjoyable thing for me was when the game last Friday night was over. I was elated and excited, but my most thrilling moments were standing back and watching the fans, kids, and other coaches. It was almost like an out-of-body experience. It was no kind of personal gratification as much as it was like, wow, look at what our community and this group of young men has done for our community.”

He added that the Catholic game turned out exactly as the Bulldogs hoped it would. “Prior to the game last week in Montgomery and even at halftime, it was nice to see our fans come to Cramton Bowl and support these young men,” he said.

According to Taylor, Cherokee County will be similar to Andalusia in many ways.

“There are only two teams left and no bad ones. I don’t think before the season started that anybody would have predicted Cherokee County would be the North representative. Coach (Jacob) Kelley has done a fantastic job up there. They’re a ground-and-pound type offense and have the ability to throw the ball around if that’s what the defense dictates to them. It’s another one of those games where you have to be really sound and at 11:01, play football. I’m sure he is telling his kids the exact same thing. Handling that environment and handling this entire week is going to be huge. They’re a really good football team and not here by accident. They were just like us and surprised like some people in this community, but our kids weren’t surprised,” he said.

The game will be broadcast live on Alabama Public Television (APT). Tickets for the game are $15 plus a processing fee and must be purchased through GoFan. There is a cashless and clear bag policy at Auburn University. Credit or debit cards must be used for all transactions at the stadium. All bags must be clear and are subject to be checked upon entry into Jordan-Hare Stadium.

“To be able to go to Auburn with the way they do the Super 7 is really special. We want to enjoy this once-in-a-lifetime opportunity, but the ultimate goal begins at 11 on Friday,” Taylor said.