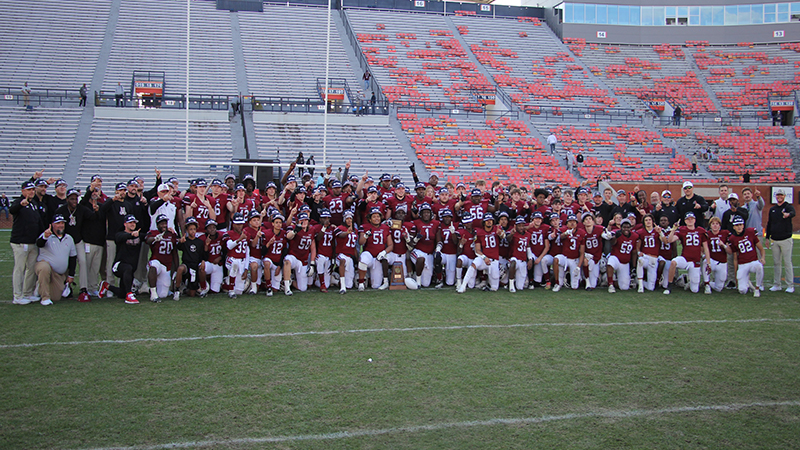 Andalusia closed out a historical season and roared to a 28-7 win over Cherokee County in the AHSAA 4A State Championship for the program’s third title at Auburn’s Jordan-Hare Stadium Friday.

The Bulldogs gave head coach Trent Taylor his first title and finished the season with a 14-1 record, while the Warriors ended the year at 12-3.

“This is such a surreal feeling right now. I’m so excited for our kids, our coaches, and our town but really don’t have any words. Our fans came out and showed their support today. I happened to be a senior the last time we won the championship, but it doesn’t seem like 45 years to me. I’m really proud of our community. What a crowd! I can’t say enough about this group. Their mental toughness is key. For these guys to have done what they have done is remarkable,” Taylor said.

Cason Clarke kicked off to the 17-yard line where Jackson Amos returned the ball to the 31-yard line. Following an offside penalty, Jacob Cornejo had an 8-yard run and a first down to the 44. The drive ultimately stalled as Cherokee County was forced to punt. Dorean Crittenden opened the first drive with three runs for 22 yards and moved the chains. A pass interference on second-and-1 resulted in a first down to the opposing 43-yard line. Two plays later, Jack Lathrop connected with Kaden Denson on an 11-yard pass for another first down. The game remained scoreless with 4:28 left in the first quarter after Andalusia turned the ball over on downs.

The defense forced a quick three-and-out, and the Bulldogs drew first blood on a 5-play, 63-yard drive. Lathrop found Denson open for an 11-yard gain and set up third-and-1 at the 46-yard line. Crittenden delivered back-to-back first-down runs and set up the first score when Lathrop threw a 34-yard touchdown strike to Denson. Cobb Stewart added the PAT for a 7-0 lead with 1:53 left in the first quarter. Ben Frampton returned the ensuing kickoff 22 yards to the 30-yard line, but the Warriors were unable to advance the ball at the end of the first quarter.

Following a punt, Denson hauled in a 19-yard reception aided by a facemask penalty. Crittenden found an opening and collected two first downs with runs of 12 and 19 yards into the red zone. A fumble backed the ball up to the 29-yard line, and a 45-yard field goal was no good with 8:32 remaining until halftime.

Cornejo began the next possession with an 11-yard run for a first down. Amos kept the drive going with an 8-yard run and set up a 20-yard sprint by Cornejo. Three plays later, a fumble nearly resulted in disaster. Cade Hopper followed with a 6-yard pass to Malachi Horton and a 12-yard completion to Amos. Cornejo converted a fourth-and-3 with a 13-yard run and drew Cherokee County even at 7-7 with 4:32 left until halftime. Zerrick Jones had an 18-yard kickoff return before Crittenden tallied 53 yards and two first downs to the opposing 14-yard line. After a timeout, Jones crossed the goal line from seven yards out. Stewart split the uprights as Andalusia took a 14-7 lead with 2:42 to go in the half.

Hopper had a 25-yard pass to Frampton before Horton rushed for another first down to the 41-yard line. Cornejo moved the chains again with a 13-yard run. The lead stayed seven when Frampton pushed a 36-yard field goal wide right just before halftime.

Neither side was able to get into an offensive rhythm for the opening eight minutes of the third quarter. Dylan Jackson delivered a huge 50-yard punt that the Bulldogs downed at the 3-yard line. The Warriors went three-and-out before Tycamren Jackson had a 12-yard return to the 32-yard line. Crittenden gained all 32 yards on the drive and found pay dirt from a yard out. Stewart’s PAT took the lead to 21-7 with 28 seconds left in the quarter.

Hopper completed a 23-yard pass to Alex Johnson across midfield and another 19-yard completion on the first play of the final quarter. Xavier Marshall had other ideas on the next play and delivered a crucial interception. Lathrop pushed the ball to the 43-yard line with an 18-yard pass to Denson. Crittenden continued his strong rushing attack with 33 yards and a pair of first downs. Jones followed with a seven-yard scamper into the red zone and a 15-yard run to the 9-yard line. Crittenden found green grass and increased the margin to 28-7 with a 2-yard touchdown run at the 6:55 mark of the fourth.

“The interception for Xavier to be a part of the coverage was unique for us. Sometimes, it is not what you do as a coach but what the players do. We were in the right place at the right time, and this is 45 years in the making. Winning is hard no matter what level, and this accomplishment was very special,” Taylor said.

Cherokee County converted two third downs on the next drive but ran into another defensive wall. Cameron Johnson and Landen Marshall each picked up a sack as the stingy defense forced a turnover on downs. Andalusia went into victory formation and sealed the program’s first title since 1977 following two additional runs by Crittenden.

“I told the team not to pay any attention to the scoreboard. Just play and just play because every play has its own identity. Dorean has started on defense all year long. He and J’Marion have worked together, and a lot of guys had to step up. Xavier had to step up. Our four seniors on the offensive line have such a good bond, and Coach (Garrett) Windham does such a good job. KD didn’t get the opportunity to go to campus this summer due to injury, but this young man has so much talent and deserves to be playing on Saturdays. This group is so special. I don’t think there is one kid that stands out as a leader because they are all leaders,” he added.

The Bulldogs finished the game with 368 yards (107 passing, 261 rushing). The Warriors managed 215 yards (101 passing, 114 rushing). Lathrop was 9-of-13 passing for 107 yards and one touchdown. Crittenden was named the game’s MVP with 31 carries for 246 yards with two touchdowns. Denson added eight receptions for 106 yards and a score.

“It was a big role I had to take up. I did what I had to do for my team. I don’t even know how to explain how I feel and don’t even have any words,” Crittenden said. “I’m just so glad we got a chance at winning a state championship. The community has always had our back,” Denson added.

Johnson paced the Andalusia defense with nine tackles, which included 2.5 for loss, and was followed by Jaeden Jackson at seven. Marshall, Garrett Blackston, and Josh Riley each tallied six tackles in the win. “It means a lot to me to get to experience this with my team. Our coaches have done a good job,” Johnson said.