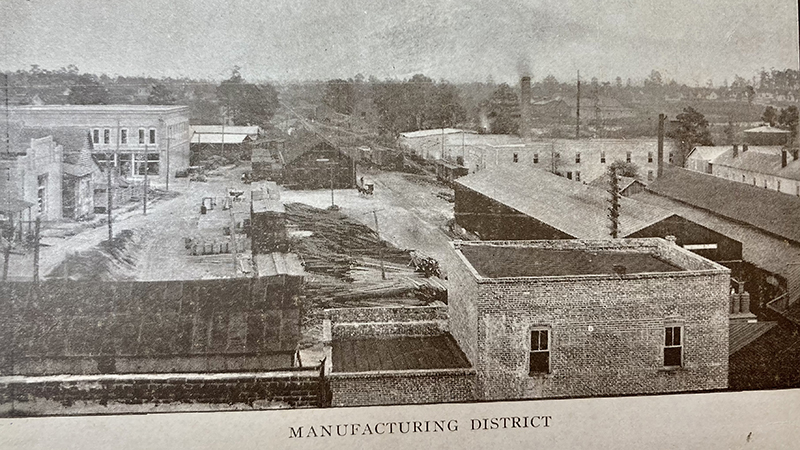 The smokestack is shown in this old postcard picture. The photo was taken from the Thagard-Mallette Drug Store building now razed.

An old friend dropped by my office today to ask me if I knew of or remembered certain things about our growing up days in Andalusia. From time to time, people I run into around town quiz me about my memories of yesterday. Here are some typical questions that I have sort of accumulated to ask you readers:

Do you remember when and if downtown Andalusia used to be closed on Wednesday afternoons instead of Thursdays? No, I don’t, but if I had to guess, when the Country Club got built, those golfers preferred Thursday afternoons for their games.

That man in the overalls that used to ride through town and around the square in his mule and wagon – whatever happened to him? Who was he? Yes, I do remember him. I think that was just his mode of transportation. I can certainly picture him. Can you?

Do you remember when East Three Notch Street used to be two-lane? Well, progress is about to happen. Low and behold, the main street is going to be two-lanes again, it was publicized recently by the City Council. Maybe it will slow everyone down again to the previous 30 MPH speed limit. My daddy often reminded me of that when I was learning to drive and even years afterwards.

Can you picture the little house or mysterious cottage that used to be situated to the right of the AHS driveway entrance? After the older lady who lived there died, I think the school board bought the property, and it is used on home football game nights for spill-over parking. I often think of the “Little old lady that swallowed a fly…..” song.

Do you remember when the Andalusia Municipal Stadium was built? It was 1950. I guess that is when the concrete block wall was installed around the boundary. I don’t know which school class got it started, but usually in the summer time, class members would slip over the fence and paint in large block numbers their class year – for example, 60, 58, 55, 62, 65.

It always happened in the nighttime hours. I overheard my daddy say, “That green paint on those numbers looks like the paint in my garage!” WHAT?

Does anybody, AHS grads, remember the Thursday night pep rallies at the school when there were bonfires? They were located way away from the main building over to the east of the parking lot. The school administrators were probably thinking of the school cheer song and watching the situation very carefully. “…When we’re through we’ll burn the school for the glory of AHS!” That’s why we don’t have bonfires anymore.

Young people today use their parents’ credit and debit cards. Does anyone remember when there used to be “allowances.” 50 cents a week was pretty standard back then, but when Saturday came along, parents might have slipped some more dimes and quarters in the hands of their children who attended the picture show at the Martin Theatre. They were entertained just about all day with one cowboy movie after another, a science fiction, a horror movie, serials, previews – These movies might include the 3-D thriller, “The House of Wax,” “The Incredible Shrinking Man,” “Dracula.”

Can you picture children roller skating up and down the sidewalks of the main streets? If you were a skater, you probably remember the cracks in the sidewalks. Did you count the cracks? Skating rinks came later. How many children riding bicycles do we see these days in the summer time. Not as many as yesterday. Cell phones and television have taken the place, some people say.

Do you remember when the “Miss Andalusia” beauty pageant used to be held on the stage at the Martin Theatre? Well, it did – prior to the construction of the AHS auditorium in early 1964. Somewhere along the line, the contest became known as the “Miss Memolusia” contest. I am pretty sure we can thank AHS English teacher of 39 years Mr. Joseph C. Wingard for that. He was the promoter of that event each year when he was the yearbook sponsor. He and another teacher, Dan Shehan, together wrote the song, “Oh, Lovely Miss Memolusia.”

Were you a teenager when the football game crowd congregated at the canteen after the local games? The canteen on Burnette Street had a jukebox, and some remember Mrs. Bebe Green, AHS teacher, being the chaperone. She could crack the whip but all in fun!

Does anyone living remember when there was not a by-pass? Hmmmm! It cut through a lot of neighborhoods.

Do any of you keenagers remember Charlie Bradley’s Root Beer stand and his broasted chicken and root beer floats? If you do, then you’ll remember the folk singing that went on in the parking lot on the hoods of cars and the tailgates of trucks. “The Answer, My Friend, is Blowin’ in the Wind” and it still is.

I have heard some citizens recall when telephone numbers were 507-W or 409-J. After that when dial phones came about, the numbers were CA2-5464 then later just 222-5464. Some folks had party lines. Others just had nosey sisters or brothers who wanted to listen in on the extension or maybe use the phone to call their friends. “Ma-maaaaaaa, tell Sally to hang up the phone.”

Do you remember when clean washed clothes used to be hung on a clothes line in the back yard? A lot of grandmothers remember that. No wonder some woman probably (if I had to guess) invented “Pampers!”

Do you remember the tall smoke stack that was down on Central Street (now Tisdale Street) adjacent to the Farmers Market and the Andalusia Manufacturing Co. buildings? It had something to do with generating power in the old days. Someone climbed it one time in the 1920s and took a picture of downtown Andalusia toward the Court Square area. One could see the steeple of the old Methodist Church once located on Church Street in the picture. Now you know how Church Street got its name.

Does anybody remember how bustling downtown Andalusia was on Saturdays? The courthouse was open until noon. The ten cent stores did big business. The feed and seed and hardware establishments did a booming business since the “country came to town.” Remember the smell of baked bread and other bakery favorites drifting from the Brunson Bakery. This was before the days of air conditioning and the aroma of delicious doughnuts and cinnamon rolls filled the air space of downtown. That’s where birthday cakes and wedding cakes were artistically decorated by Aunt Carolyn Brunson Caton. Don’t forget the popcorn and hot dogs at Christo’s.

Rummage sales were often held on the seat walls in front of the courthouse – a good way to make some coins for the Saturday afternoon picture show and those concessions!

Who can remember when the post office was where the public library is today? Well, there was quite a ruckus when the post office and the powers that be in Washington announced that the new post office would be built on East Three Notch Street, several blocks away from Court Square. Businessmen were used to walking from their offices in and around the square for their daily checking of the post office boxes. How dare Washington make such an important change in the routine of so many!

Do any of the Alatex employees remember the swimming pool on the grounds of the textile plant? I would love to hear more stories about that.

This was before most of us were born, but it is said that there used to be a much bigger water fall at River Falls. One old timer said it may have been dynamited to build the Horse Shoe Lumber Company in that vicinity. And yes, convicts did work there. As a matter of fact, when the Flood of 1929 occurred, some of those convicts saved the lives of some of the head men. There was a commissary or a company store on the site. Some of those coins or tokens can be viewed at the Three Notch Museum on Historic Central Street in Andalusia.

When they built the new bridge across the Conecuh River, a doctor was making a house call to River Falls late one night. Not thinking about the new bridge, Dr. Ray Evers followed the road as usual. Apparently, the old bridge was no longer. Maybe there was a barricade, maybe not. He was driving so fast, his car jumped the river and landed on the other side. Bless his heart! He made it. Dr. Evers practiced at the Hillcrest Infirmary later known as Columbia General Hospital. He built a nurses’ residence adjacent to the hospital. The building remains today and is now occupied by Picket Fence and Blue Goose Nursery.

Lastly, I will pose this question. Do you remember when most everybody attended church on Sundays? They always brought their Bibles. There was no question of “Well, I don’t think I’ll go today. Would rather stay home and rest.” Thinking back to those times of the late 1940s, 1950s, and 1960s, men had returned from a horrible war. Those that made it back were grateful and thankful to God. The generations before in Andalusia had helped to build the majestic places of worship in the downtown. Their pride in providing places of worship for the citizens of the small town inspired them to gather on the Lord’s Day. Some of those veterans helped to establish other neighborhood churches in town. That “greatest generation,” they will always be remembered for their many civic contributions, but especially for helping to make Andalusia what it is today when they came home from World War II. We take a lot for granted and forget many times about the sacrifices of those who came before us.

Readers, please excuse any mistakes in this column. I don’t mind being corrected. Hope you have enjoyed a walk down memory lane.