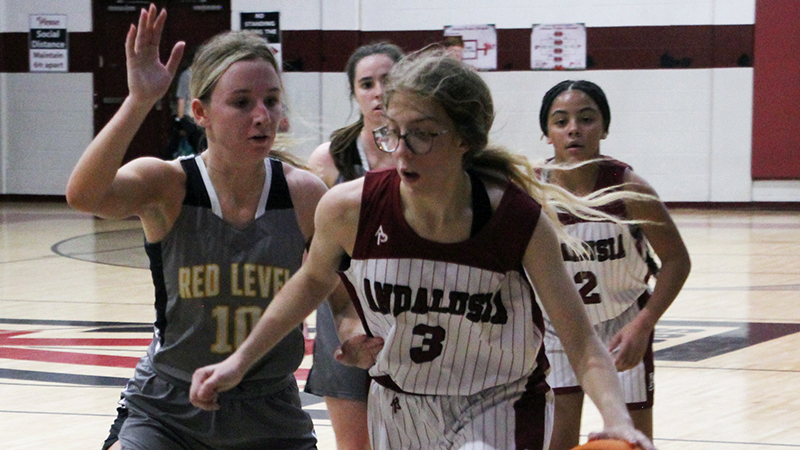 Andalusia overcame an early deficit and fought back for a 53-41 win over Red Level in the first girls’ game of Richard Robertson’s 56th Annual Andalusia Christmas Tournament Thursday.

The Lady Tigers built a 6-2 lead in the first period until Kamari Gay began a 9-0 run with a three-point play. Zanya Anderson followed with consecutive drives to the basket, and Gay added a layup. Cape Merrell also scored as the Lady Bulldogs took an 18-12 lead after one. Kaitlyn Beverly led Red Level with five points in the opening period and was followed by Alyah Robertson with four. Andalusia used a strong defense in the second and took a 30-16 lead at halftime. Jaidyn Berry and Gay paced the offense with four each before the break. Mariah Crowell and Robertson both had two free throws for the visitors.

Beverly made three baskets as Red Level outscored Andalusia by four points in the third. Dianna-Grace Nelson, Makayla Wright, and Berry each scored two as the score stood at 36-26 after three. The two teams traded baskets early in the final period until the Lady Bulldogs opened up a 47-30 lead. Merrell scored six in the last period. Liz Cross had five points in the fourth as Summer Beverly converted two baskets. The Lady Tigers cut the deficit to four at 47-39 with a late push but ultimately fell short.

Gay led AHS with 12 points, while Anderson had 11. Nelson, Berry, and Merrell each finished with eight points in the win. K. Beverly was the top RLS scorer with 13 points and followed by Robertson at 12. Cross had eight in the loss as Crowell and S. Beverly tallied four each.

Andalusia advances to the tournament championship game Saturday, Dec. 10, at 5:30 p.m. against the Georgiana-Greenville winner.