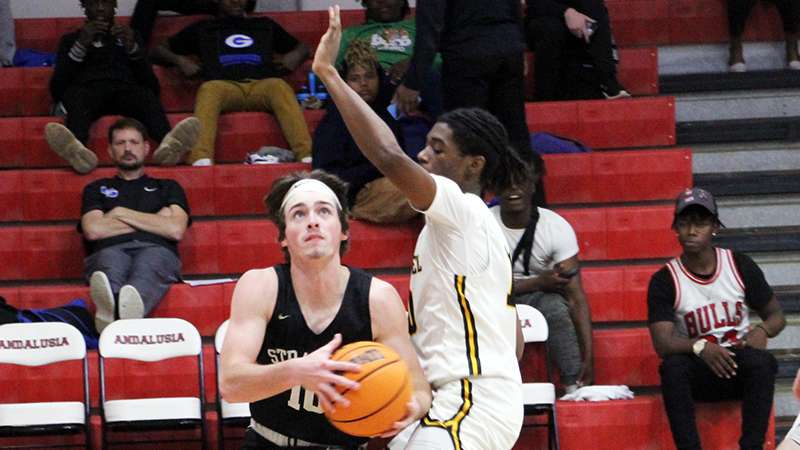 Layne Grantham, left, eyes the net during a play for the Straughn offense against Red Level defender Javen Poindexter. (PHOTO BY ZACK MAIO)

In a game with plenty of scoring, Red Level edged past Straughn 83-76 in an opening-round boys’ contest of Richard Robertson’s 56th Annual Andalusia Christmas Tournament Thursday.

The score was tied at 4-4 as both teams went back and forth in the opening period. Red Level then took a 13-8 lead before Straughn used a 12-1 sprint. Javen Poindexter started strong with 10 points in the first as Malikye Wright added five. Daniel Bell blistered the net beyond the arc with nine points off three-pointers. Micah Turner notched six as SHS took a 20-16 lead after one. Bell added four more points before the half, while Layne Grantham scored three. Poindexter and Wright continued to spark the offense with 10 each in the second and helped RLS to a 41-34 halftime lead.

Bell buried another three and cut the deficit to 41-39 before Grantham hit a jumper for a 43-42 lead. Poindexter finished with eight points in the third. Kenneth Huckabaa drained two three-pointers and had seven in the period. Caleb Padgett and Wright both grabbed four and a 57-50 lead after three. The offenses continued to light up the net in the final period with a combined 52 points. Grantham collected six down the stretch with Grant Barnes and Bell next at five each. Taylor Sikes brought Straughn to 78-76 with a nifty drive to the basket. Wright had eight in the final period, while Poindexter tallied six more. Padgett capped the fourth period scoring with five as Red Level held on.

Poindexter closed the game with 34 points for RLS, as Wright was next with 27. Padgett and Huckabaa also finished in double figures with 11 and 10, respectively. Bell was the top scorer for SHS with 23 points. Turner and Grantham each had 18. Barnes notched nine in the loss, and Sikes earned eight.

Red Level advances to the tournament semi-finals and takes on Andalusia Friday, Dec. 9, at 8 p.m. Straughn falls to the consolation bracket and awaits Opp the same day at 2 p.m.