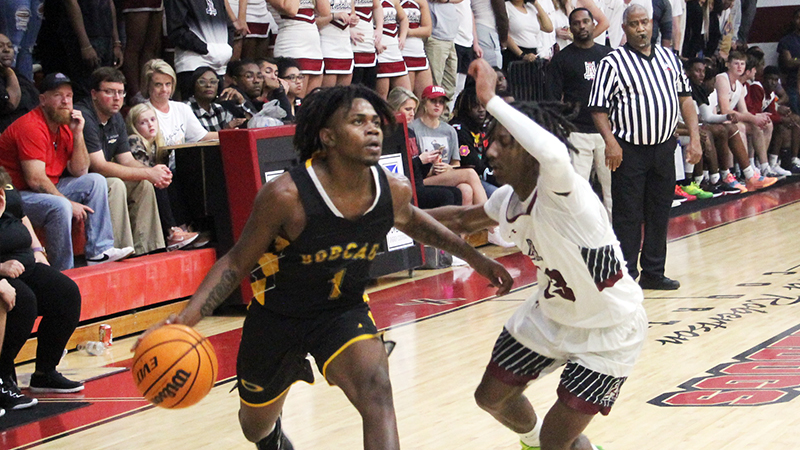 Opp’s Jabarri Hill, left, runs the next play as Andalusia’s Cadariyus Love keeps pace and defends during the play. (PHOTO BY ZACK MAIO)

Andalusia roared back from a double-digit deficit for an intense 71-61 win over Opp as the first day of Richard Robertson’s 56th Annual Andalusia Christmas Tournament ended late Thursday night.

The Bobcats seized momentum early with a 9-2 lead and padded the margin to 15-4. JaKanye Mount led the way with five in the first period and was followed by Jakelleus Lane, A.J. Coleman, and Jabarri Hill at four each. Tyler Sigers trimmed the deficit to 15-10 with consecutive three-pointers. Jordan Stallworth chipped in four points, but the Bulldogs trailed 17-10 after one. Josh Smith pushed the lead out to 25-20 with a three. Sigers evened the score at 25-25 and gave Andalusia its first lead at 28-25 with his fourth three-pointer in the second period. After Jaquez McMeans used a layup for a 30-27 lead, Terry Davis earned six in the period and helped Opp take a 31-30 lead into the locker room.

Noah Curry and Christian Sheridan combined for 11 points in the third period. Kam Weaver, Stallworth, and McMeans also contributed two apiece as the Bulldogs led 47-44 after three. Coleman picked up five for the Bobcats along with two each from Lane, Hill, Davis, and Mount. The offenses totaled 40 points in the final period. Tevin Sigers grabbed eight in a 24-point output for Andalusia. Davis scored five for Opp and edged past Mount’s four down the stretch.

Tyler Sigers paced the Bulldogs with 26 points in the win, while Stallworth also had double figures at 12. Tevin Sigers and Sheridan scored eight and seven points, respectively. Mount led the Bobcats with 15 points as Coleman and Davis each had 13. Hill earned nine points in the loss.

Andalusia will take on Red Level in the winner’s bracket semi-finals Friday, Dec. 9, at 8 p.m. Opp drops to the consolation bracket and meets Straughn the same day at 2 p.m.