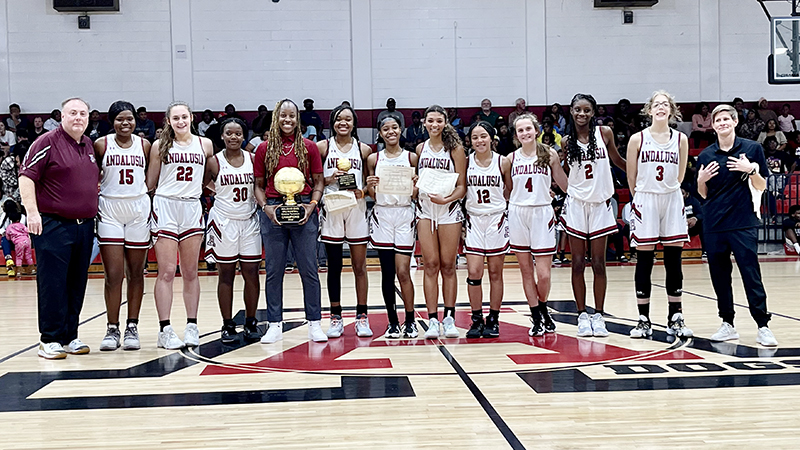 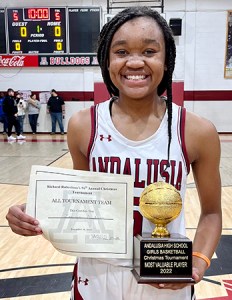 The Lady Bulldogs defeated Greenville in the title game 41-31. Cape Merrell led the way with six points out of the gate. Jaidyn Berry followed with four, as Dianna-Grace Nelson went one-of-two at the free-throw line. Je’Licia Anderson had a three for the Lady Tigers along with baskets by JoVala Ocean and Jailah Sweeney. Andalusia opened up a 13-7 lead after the first period.

The home defense continued to stay strong and only allowed five points in the second. JaKira Burnett and Swinney made the only two field goals of the period for the Lady Tigers. Elizabeth Beiler added a free throw. Six different Andalusia players scored including Zaniya Anderson who had a three-pointer. Merrell and Nelson each made baskets, while Kelsie Horwath, Kamari Gay, and Zion Williams all found the hoop. The offense helped the Lady Bulldogs to a 26-12 halftime lead.

Both teams were fairly even in the third with a combined 17 points. Anderson had five of Andalusia’s nine points, and the other four were baskets from Gay and Merrell. Sy’Nya Edwards picked up four, but the home side remained ahead 35-20 with eight minutes left.

Greenville attempted to make a comeback bid with 11 points in the fourth period and held serve by only giving up six points. Gay had three points, as Nelson scored another basket, and the Lady Bulldogs held on for the 10-point win.

Anderson, who was named the tournament MVP, was the top scorer with 11 points. Merrell also finished with double digits at 10. Gay added seven followed by Nelson at five. Along with Anderson, Berry and Gay were named to the all-tournament team.

Both teams return to the court Thursday, Dec. 15, against Wilcox Central and Friday, Dec. 16 at the Georgiana Christmas Clash. The girls are scheduled to play Thursday at 3:30 p.m. followed by the boys at 5 p.m. Championship and consolation games will be Friday at times to be determined.