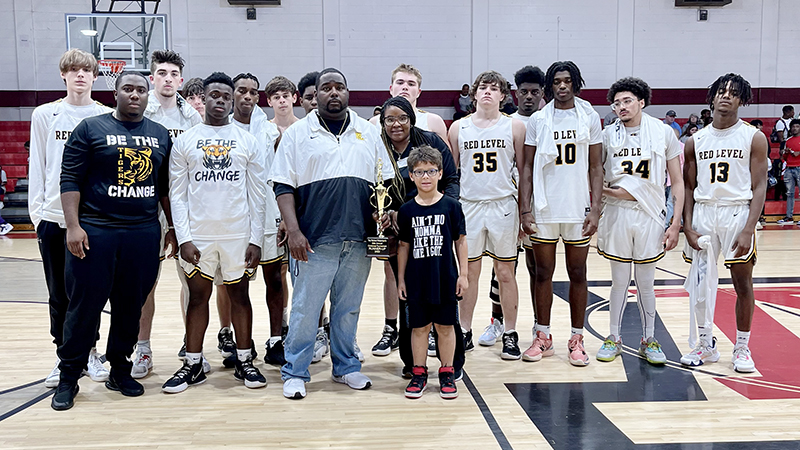 The Jaguars won their third straight tournament title with a 68-59 win over the Tigers. Red Level opened the game with a strong start and scored a dozen points in the first period. Javen Poindexter collected five points, and Caleb Padgett knocked down a three. Malikye Wright and Tony Veasey each added a basket for an early 12-9 lead. Five different players scored for Hillcrest in the opening frame.

The Jaguars then erupted for 26 points in the second and took a 35-27 lead at halftime. Trey Simpson earned nine points followed by Jacob Bradley who had eight points. Poindexter added 12 to his total with two baskets and went six-of-eight from the foul line. Wright and Padgett rounded out the second period for the Tigers with three free throws.

Both offenses continued to score in the third period as RLS cut its deficit to five with a 15-point showing. Poindexter and Wright combined for 13 points. Bradley scored seven for HHS who maintained a 47-42 lead going to the fourth.

The final period was a wild one with several ties and lead changes down the stretch. The Tigers took a 53-51 lead with four minutes to go. The Jaguars responded and grabbed a 60-55 margin at the two-minute mark before pulling away for the win. Poindexter wrapped up the last frame with 10 points. Wright converted two field goals, as Walker Simmons had a free throw. Monte Stallworth was six-of-six from the line and added a bucket.

Poindexter paced Red Level with 33 points, while Wright finished the contest with 14. Padgett scored eight points in the loss. Stallworth led Hillcrest with 16 points, as Bradley and Simpson also had double figures with 15 and 11 points, respectively.

Red Level is scheduled to travel to Straughn for a tripleheader beginning at 4:30 p.m. Thursday, Dec. 15. The JV boys will begin play followed by the varsity girls and boys.