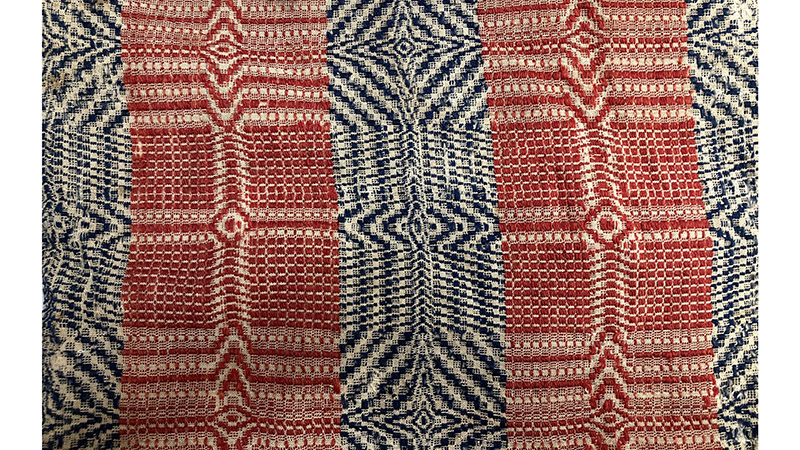 This is a typical homemade wool weave of the mid 1800s in pioneer families of Tennessee. This artistic textile piece was probably a bed throw or covering and was passed down through five generations.

Cotton Street Gallery on North Cotton Street is a new business just off Court Square for artists working with textiles in recognition and celebration of the rich culture of textiles in the Andalusia area. Various textile creations are displayed for the public to view. Starting in January of 2023, the gallery will begin a series of Textile Techniques Community classes. The long term plan for the site is a residency program with studios for artists working with textiles. A gift shop in the gallery features a wide array of handmade textile items and vintage quilts available for purchase.

This new venue in downtown which has opened this week and their mission reminds me of a family story I remember written by a late great paternal aunt of mine, Sallie Bass Arnold, who was born on August 9, 1869, in a farmhouse a stone’s throw from Smith Fork Creek in DeKalb County, two miles from Dowelltown, Tennessee. Daughter of my great grandparents Captain Ezekial Bass and Susie Lawrence Bass, Miss Sallie was the youngest of eleven children. She attended rural schools, Earl College, and was graduated at twenty years of age from Lawrence College in Alexandria, Tennessee.

When Sallie Bass Arnold was over 80 years old, it occurred to her that the family and friends might like a story about her growing up years. So she wrote a story as a Christmas greeting-gift, “Happy Sallie from Cherry Valley.”

There are many stories of frontier families in Covington County, Alabama similar to this so because I think you will enjoy this snippet of the past, I will share parts of the story with you readers.

“The earliest remembrance of my life occurred when I was four years old. Our wash woman didn’t come on the day of the week set apart for that work so Mother said, ’Sallie, if you will help me, we’ll do Nora’s work, and if she comes tomorrow, the clothes will be all ready for her to iron.’ First we went down to the spring house where our supply of water came out of a rock basin by the side of the hill. We dipped the cool crystal clear water in a cedar pail. Our iron wash pot was down near the water and so was the wood pile. Mother built the fire around the pot and filled it with water while I put chips and limbs around to make a big blaze as I had seen Nora do.”

“While the water was getting hot, we went to the house,  gathered up the clothes, tied them in a sheet, and carried them down where we had everything in readiness. I told Mother I would wash the socks and stockings, and she could do the rest. Soon I was over the hot suds when my arm broke out in a red rash. I went running to Mother and showed that to her.”

“‘Why child,’ she exclaimed, ‘You have the measles. Go quickly and get in your trundle bed.’ She got a pot of clothes on to boil, and then came to the house and made a hot tea from some herbs from the field which she had gathered. This caused the miserable measles to break out. You must stay in the bed in a dark room until the rash has gone or you will weaken your eyes.’”

“I didn’t feel a bit sick, but soon I went to sleep. When I awoke Mother had finished the washing and had hung the clothes to dry. She managed to keep me in bed until the next morning. That is the last I remember of measles or any other illness during my childhood. No doctor ever put in an appearance at our house for any of the children that lived there. Mother used herbs and was very successful in her doctoring. She was a midwife and ‘Aunt Susie’ as she was affectionately known was much in demand in the surrounding neighborhood.”

“I started to school when I was six years old, with a blue-back speller in my satchel. The ABC’s had to be learned first. If I was not looking at my book when the teacher came around, he would hit my fingers with his pencil and say, ‘Sallie, get to studying.’”

“My heavenly Father became my partner when I was in my teens. I was baptized in a creek near my home in the mountains of Tennessee. There were no pools in churches in the hill country then nor do they have them now. I cherish this particular sacred spot in the vicinity where my father and mother, grandfather and grandmother were buried in the Salem Baptist Church cemetery.”

“My father was a farmer. Eleven children, two girls and nine boys were reared in his home. I was the youngest and am now the only one living of this large family. Some of you elderly people must know the discipline it took to keep peace in the home. If my youngest brother Charles and I got to quarreling, Father would make us kiss each other then tell us to sit and face each other by the great log fire if it were in the winter time. We didn’t dare get up until father said we might. Everything was ‘law and gospel’ with him, and his children obeyed him. Having learned obedience in the home which is so essential to all generations, these nine sons went out into the world law abiding citizens, and the two girls married men of sterling worth.”

“All along my life, I had learned the art of carding and spinning wool and yarn in which our family wardrobe was made with cloth woven in the family loom. The sheep were clipped in the early Spring. This procedure not only made them more comfortable but also it gave us material for our clothes in cold winter time. So the women washed the wool and picked the burrs out of it. Long rolls were made which were spun into thread and dyed into pretty colors ready for weaving in striped designed by mother and daughters for their dresses and solid colors for the boys’ pants and coats.”

“Socks and stockings were knit in the summertime for the winter. With this warm clothing, children could go out in the coldest weather in Tennessee and be comfortable. As I remember, we never had a doctor in our home as I was growing into womanhood since my mother had a deft hand with herbs.”

“At the age of fifteen, I began to dream as girls will of the boys, and I wanted a new dress. Mother told me there was a sheep hide out in the smoke house that I could have. I rushed out to get it and clipped the wool off, washed and dried it, and then, the biggest task of all had to be done. The sheep had been running wild in the forest where there were cockle burrs in abundance. These had stuck in the wool along with Spanish needles a-plenty. I wanted that dress with all my heart so I set to work day after day picking the wool clean enough for the market. At long last, it was ready for the peddler who came around in a covered wagon drawn by a span of horses. He would come to pick up the eggs and butter or whatever mother had to sell.

“I proudly took my wool out and sold it for cash, the only money I had ever earned as my very own. I enlisted the aid of my sister-in-law to accompany me to the general store to select the material for a dress. My sister who had such good taste in style made my new dress.”

“I felt very dressed up in it on a Sunday when my sweetheart and I were going to church. We were riding horseback, and I sat on my horse with pride feeling that all was well with me and the world. We came to a creek, and as our horses were wading across, my own horse found the cold water completely fascinating on that hot July day. She immediately proceeded to take herself a bath with me in my new finery perched on her back. I didn’t fall off because I clung to the horn of the saddle. I just sat quietly looking piteously at my escort. He said, ‘Give me your horse’s bridle and catch hold of my hand and let me pull you up behind me.’ I was so embarrassed but saw no alternative. It was either forget my modesty or sit there half the day. After I had gotten on his horse, we realized that we were in something of a predicament for we had started to church, and I wanted to be decently dressed to go into the house of the Lord.”

“Across the creek was a house where there was a woman at home. She had seen what happened and came out saying, ‘Miss Sallie, don’t let your wet stockings keep you from goin’ to church. Set down in this chair and let me ring the water out.’ And she did just that. ‘Now go on fast to get there on time!’ I don’t believe anyone that morning could have known I had been wading with my wayward beast of burden against my will.”

“When we got to the church, I joined the other women in our pew. The preacher stood in the pulpit midway between the women and the men as they sang the good old hymns without an instrument to set the pitch. A man would start the songs just right and the music was melodious and very sweet. To this day, I love the songs sung without an instrument, pitched with a whistle to get the right pitch.”

More of Sallie’s story will be shared in a future Remember When column. She was my grandfather Bass’ sister and was widely known for her poetry. From her book of poems, “Word Bouquets” I will quote one of my favorites – ‘There is so much in my life to do. I know I never shall get through, but what I leave down here undone will occupy some other one!’ How true that is.

I leave you with another of her poems, “A MOTHER’S PRAYER,” which is appropriate for this season of the year – “Dear Father in heaven, Let Thy Star of Light illuminate the world this Christmas night that nations will see their wrong way of living and change from war to loving and giving.”

— Sue Bass Wilson, AHS Class of 1965, is a local real estate broker, former choral music teacher, and long-time member of the Covington Historical Society. She can be reached at suebwilson47@gmail.com.