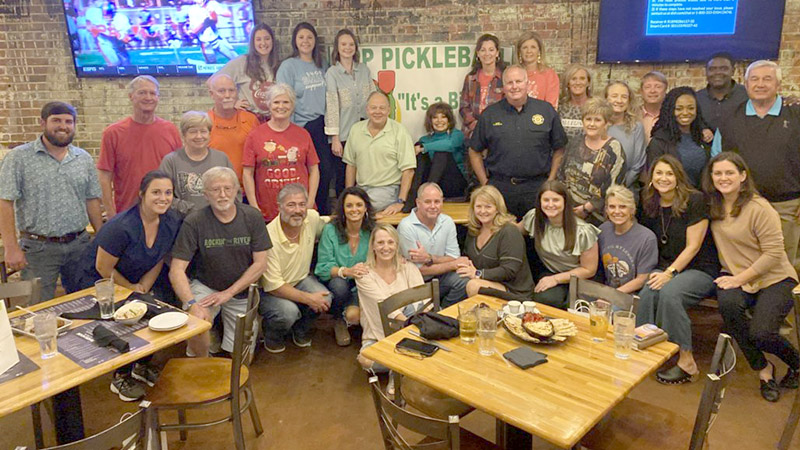 A drawing for teams and matches of Opp’s First Pickleball Tournament was held at the Wheelhouse Restaurant.

Pickleball is a fast-growing new sport, and within the City of Opp and its Park and Recreation Department, a tournament was held for the first time Saturday, Dec. 10.

The tournament was held at the Opp Sports Complex tennis courts. All six courts were restriped and prepared for pickleball.

“Our new park and recreation director Britt Wilson has hit the ground running and helped launch the program. Kelly Johnson, who has worked extensively in parks and recreation, worked out all the details for equipment and the tournament. Local businesses got involved and all of a sudden, it was game on. It was a great day and great fun. We will definitely have another tournament. The thing about pickleball is that it is great for all ages,” said Opp Mayor Becky Bracke.

There were 16 teams that competed in the inaugural double-elimination tournament. Christy and Caiden Ballard of the Jolley Volleys won the championship over Aaron and Keena Hightower, known as Flying High. The Ballards had to defeat the Hightowers twice to raise the crown.

“We had our first pickleball session back in October. Bruce Cuddy, a pickleball pro from Bay Minette, gave everyone some beginners’ tips. Believe me, we were all beginners at the time,” Bracke added. “Since then, play has been pretty consistent on Tuesday afternoons and other times for those that became really serious.”

Pickleball is a sport combining many elements of tennis, badminton, and Ping-Pong. It can be played both indoors or outdoors on a badminton-sized court and a slightly modified tennis set. The game is played with a paddle and plastic ball with holes, much like a Wiffle ball. Competition is held in both a singles and doubles format similar to tennis.

Pickleball was invented in 1965 on Bainbridge Island, a short ferry ride from Seattle, Washington. Three dads, Joel Pritchard, Bill Bell, and Barney McCallum, whose kids were bored with their usual summertime activities, are credited for creating the game. Pickleball has evolved from original handmade equipment and simple rules into a popular sport throughout the United States and Canada. The game is growing internationally as well with many European and Asian countries adding courts.

The first known pickleball tournament in the world was held at South Center Athletic Club in Tukwila, Washington, during the spring of 1976. Pickleball was played in all 50 states for the first time in 1990. Between its inception and 2020, it was a popular sport in the Pacific Northwest. In 2021 and 2022, it was named the fastest-growing sport in the nation by the Sports and Fitness Industry Association with over 4.8 million players.

Thousands of pickleball tournaments are now held throughout the United States, including the U.S. National Championships and the U.S. Open Tournament.

For more information about the Opp Pickleball Tournament or details, call the Opp Parks and Recreation Department at 334-493-7970 or email bwilson@cityofopp.com.

“Come join us and find out what all the talk is about,” Bracke said.