The Covington County unemployment rate for November held steady from the previous month, according to the Alabama Department of Labor. 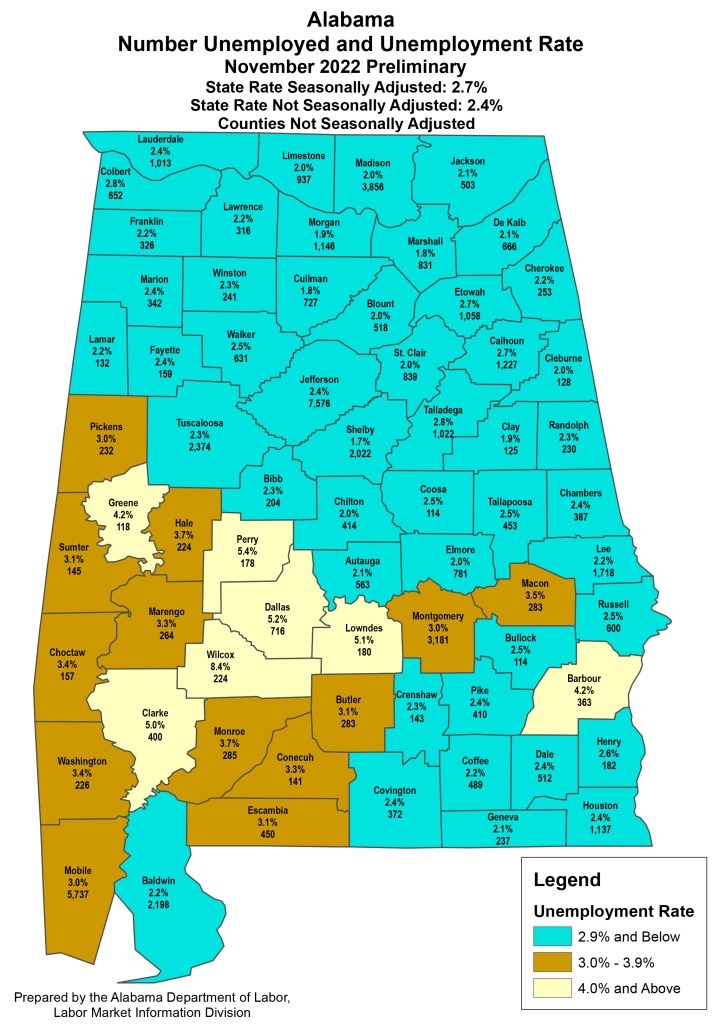 The county’s November unemployment rate came in at 2.4 percent, the same as October, but a slight increase from November 2021’s rate of 2.3 percent. The rate is based on November’s civilian workforce of 15,750.

Covington County’s unemployment is below the state rate, which was announced at 2.7 percent, unchanged from October, and below November 2021’s rate of 3.1 percent. November’s statewide rate represents 63,043 unemployed persons, compared to 61,721 in October and 69,688 in November 2021.

“It is encouraging to see that Alabama’s economy is supporting more jobs today than ever in our 203-year history,” said Governor Kay Ivey. “While we continue maintaining a low unemployment rate, the fact that our businesses are growing jobs is certainly something to be grateful for this holiday season. We will continue working hard to support Alabamians as we weather a challenging national climate.”

Over the month, wage and salary employment increased in November by 9,600. Monthly gains were seen in the trade, transportation and utilities sector (+8,100), the government sector (+1,600) and the professional and business services sector (+1,100), among others.

“We continue to be encouraged by the job growth in Alabama,” said Labor Secretary Fitzgerald Washington. “Many of our industries are seeing record high employment, and wages are maintaining strong year over year growth as well.”

Counties with the lowest unemployment rates are: Shelby County at 1.7 percent, Marshall and Cullman counties at 1.8 percent and Morgan and Clay counties at 1.9 percent.

Counties with the highest unemployment rates are: Wilcox County at 8.4 percent, Perry County at 5.4 percent and Dallas County at 5.2 percent.

Major cities with the lowest unemployment rates are: Homewood and Trussville at 1.5 percent, Vestavia Hills and Madison at 1.6 percent and Alabaster and Hoover at 1.7 percent.

Major cities with the highest unemployment rates are: Selma at 6.2 percent, Prichard at 5.7 percent and Bessemer at 3.8 percent.