Jones Veterinary Hospital and the Andalusia Animal Shelter teamed up and raised $975 with a tribute to the late Dr. Louis “Doc” Jones with SantaPaws pictures last week. 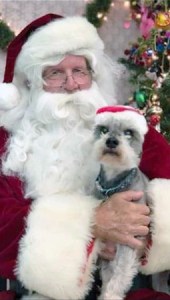 The late Dr. Louis “Doc” Jones in a picture from a past SantaPaws event at Jones Veterinary Hospital. Dr. Jones, who passed away earlier this year, began the program to raise funds for the Andalusia Animal Shelter. (SUBMITTED PHOTO)

Held Friday, Dec. 16, from 2 to 4 p.m., the event also allowed for several donations to be made to benefit local shelter pets.

“Doc Jones passed suddenly in March of 2022. His passion was the animals and children of all ages. His memorial service was even held at Jones Veterinary by the request of his family. He began doing community-wide awareness for fundraising for low-cost spay and neuters and also helped out with our animal shelter’s pets in need. No one knows how many years he was behind it all,” Carrie Sowell of Jones Veterinary said.

SantaPaws was first started in 2021 at Jones Veterinary Hospital. “Doc Louis decided to reinvent his passion, and that’s how we came up with the idea to do SantaPaws pictures. This is a basically pet picture taken with Santa. All we ask for is a donation off the supplies wish list or a monetary contribution to the Andalusia Animal Shelter’s account at Jones Veterinary to be used for the medical care of shelter pets in need at our hospital.”

The Jones Veterinary staff originally decided not to hold SantaPaws this year. Santa was played by Rob Richburg of Andalusia.

“We miss Doc so much. It hurts our hearts to do this without him. Santa and Mrs. Claus, who are wonderful people, came to us in November and asked why we hadn’t set a date. Santa insisted that Doc would want us to, so Dec. 16 was the chosen date in remembrance of Dr. Jones. We work very closely with the shelter, Kayla, and the staff and volunteers daily. We have every intention of growing this annual event for shelter pets in honor of Doc Jones. We also plan on adding an event in the spring or summer each year. Christmas is a wonderful time in Andalusia, and our community is a giving one, but the need is here year-round,” Sowell stated.

According to Sowell, the Andalusia Animal Shelter can always use additional funds. “Many months are a struggle. Director Kayla Robbins does an amazing job up there. Many people want to criticize the job, facility, and funding, but so few actually step up to make a difference.”

The Andalusia Animal Shelter was grateful to partner with Jones Veterinary. “We are really appreciative of the Jones Veterinary staff for holding this event and helping us raise funds for the shelter. We had a blast participating and are thankful to those who helped us with much-needed donations for our pets here at the shelter. It has been a slow year for us, but we are hopeful the new year will bring people eager to adopt and provide a loving home for these animals,” Robbins said.

Jones Veterinary was opened by Dr. Louis Jones 47 years ago. Dr. Troy Jones joined him almost 20 years ago and was recently joined by Dr. Brittney Reynolds.

“We have an amazing staff who loves all of the pets as much as our own. We are now owned by Southern Veterinary Partners (SVP). Although we don’t feel corporate-owned, we are allowed and encouraged to continue business of helping pets as usual and have the ability to do events like SantaPaws for the community,” Sowell said.