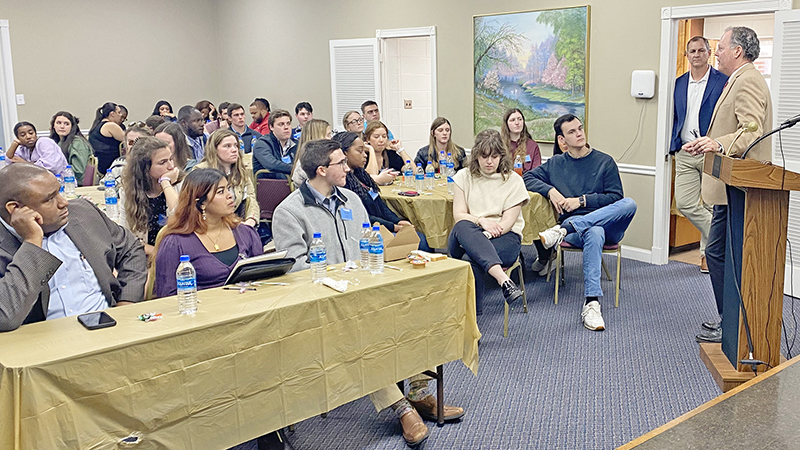 Earlier this month, the City of Andalusia was honored to host 65 University of Alabama students as part of the Blackburn Institute’s annual rural Alabama tour. The students had visited Lowndes, Butler and Conecuh counties before arriving in Andalusia. 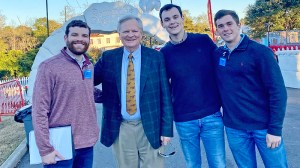 They were at PowerSouth on Wed., Dec. 14, for a session with CEO Gary Smith, followed by a meal in the board room.

They spent Wednesday night at the Best Western in Opp. (Even though planning began in August, there were not enough rooms to accommodate the students in one hotel in Andalusia that evening).

On Thursday morning, they met with officials from CCB Community Bank and Southern Independent Bank for a session on community banking.

Mayor Johnson told the students, “You have to invest in your community if you want others to invest.” He talked about the need to improve school facilities, and how the City, School System, and the Public Education Building Authority board, chaired by Dr. Eldridge, worked together to update the auditorium and stadium.

Dr. Eldridge talked about raising private money to support the effort, and the importance of getting “buy-in” from all parties before undertaking such a project.

Coach Taylor provided a tour of the indoor practice facility and the stadium.

The afternoon session began with a presentation from City Administrator John Thompson on downtown redevelopment, and Amendment 725, which allows municipalities in Covington County to invest in the community. The students then did a walking tour of downtown to look at some of the projects mentioned in the program.

Other presenters were Daniel Wells, COO of CDG, Inc.; Andy Gibson, owner of Draftstone Properties; Lee and Debbie Williams, owners of Bluebird Coffee; and Kim and Kyle Baumgartner, owners of The B.

The afternoon ended with an hour of fun and photographs in Candyland before the students met in Andalusia City Hall for a wrap-up of their trip.

Mayor Johnson said it was refreshing to hear the comments students made about Andalusia.

“Our goal all along has been to make Andalusia a place where young people want to live, work, and raise their families,” he said. “When these very bright young people said, ‘This is a cool place, I’d like to live here,’ it was like an affirmation for us that some very hard work is paying off.”