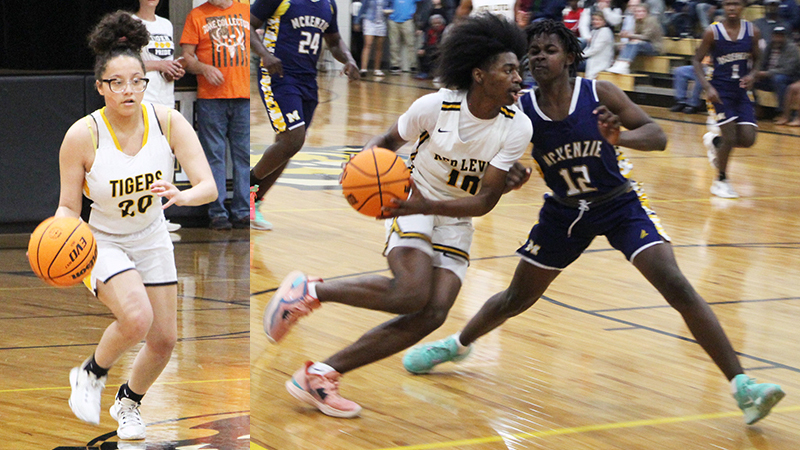 Red Level opened up its varsity area basketball schedule with a pair of wins over rival McKenzie at home and recognized senior Elizabeth Cross for reaching 1,000 career points Thursday night.

Mariah Crowell was electric from the floor with 10 points in the first period. Cross added five, and Kaitlyn Beverly garnered four as RLS maintained a 19-5 lead after one. Charisa Bullard notched three in the opening eight minutes as Alyson Brooks had two. Cross put up five additional points in the second. Summer Beverly converted a pair of free throws as Miracle Wright went one-of-three from the foul line. MHS received seven from Trenady Pierce but trailed 29-12 at halftime.

Alyha Robertson led the charge with six points in the third. K. Beverly hit two baskets, while Cross, Crowell, and S. Beverly each scored two. Sarrenati Davison scored two field goals, but the host Lady Tigers upped their lead to 45-21 after three. Cross and S. Beverly both closed out the game with four points as Elizabeth Carroll etched her name in the scoring column with a field goal. Pierce had four points for the visiting Lady Tigers in the fourth.

Cross paced Red Level with a team-high 16 points in the win. Crowell and K. Beverly also finished in double figures with 12 and 10 points, respectively. S. Beverly collected eight in the win. Pierce was the top scorer for McKenzie with 10 points in the loss.

Javen Poindexter knocked down four baskets in the opening period. Malikye Wright, Caleb Padgett, and Treshon Lane each sank a three as the host Tigers took a 17-13 lead after one. Jay Jackson led the visiting Tigers with eight points in the first period. Poindexter then added six to his total in the second, while Dominic Williams Jr. scored the remaining five points and led RLS to a 28-23 lead at halftime. Jaylen McMillian and Jackson both scored four for MHS.

Poindexter came out on fire after the break and blistered the net for 10 points including two three-pointers. Walker Simmons found the net for two as Red Level took a 46-42 lead after three. Jackson went three-of-four at the line and converted five more buckets. Both teams finished strong with a combined 35 points in the final period. Poindexter and Wright combined for all 19 RLS points. McMillian notched 10 points for MHS in the fourth and was followed by Jackson at three. Kamern Daniels also picked up a basket in the final eight minutes.

Poindexter led the host Tigers with 37 points in the win. Wright chipped in eight, while Lane earned six. Jackson paced the visiting Tigers with 26 in the loss and was followed by McMillan at 19.

Both teams will return to the court Tuesday, Jan. 10 with area contests against Georgiana.