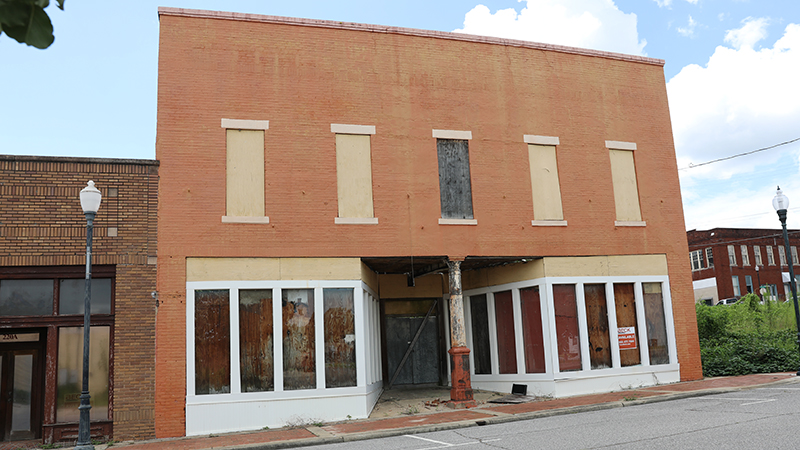 This building located on S. Cotton Street, known to longtime residents as “The James Store,” was declared unsalvageable by city officials and will be demolished. (SUBMITTED PHOTO)

The Andalusia City Council on Tuesday agreed to take down the remains of a South Cotton Street building known locally as “The James Store.”

The building, located at 218 South Cotton Street, was structurally damaged by the collapse of the roof, which in turn collapsed the second floor into the first, Andy Wiggins, director of planning and development for the city, told the council.

What remains of the building is one of 18 acquired by the City of Andalusia in 2020 as part of its commitment to downtown redevelopment. The city is working with private partners to develop those that can be salvaged. It also has removed several that were deemed too costly to repair.

“We’ve had a structural engineer look at this building,” Wiggins said. “We first thought this one could be salvaged, but when the engineer took a second look, he found a crack had developed in the wall, and the foundation has shifted.”

The decision came as the City is awaiting the completion of the Alabama Department of Environmental Management’s permitting process to begin construction of Heritage Park, also on South Cotton Street, in what was once a rail yard.

“We know we will have to address parking in this area at some point,” Mayor Earl Johnson said. “Taking this building down might fall in line with development of additional parking, and open up access to the alley behind the South Cotton Street buildings.”

Andy Gibson and Draftstone Properties have renovated the Opera House, which now has three retail spaces and upscale apartments on the second floor.

CDG Inc. currently is renovating the stately Prestwood Building on the Court Square and expects to move its corporate headquarters into the upper level later this month. Work will continue on the downstairs, where Town and Country and Lost Pizza are expected to open in the first half of 2023.

The South Cotton Street building that is coming down housed the Post Office before the building that currently serves as the Andalusia Public Library was constructed as a Post Office in 1926, according to local historian Sue Bass Wilson.

The James Store, which specialized in clothing worn by farmers, used the advertising slogan “Down The Hill From High Prices.”

A 1954 article in The Andalusia Star-News reported that Quinton James of Montgomery, owner of The James Store, had purchased the building from Martin Theatres. The article stated that, before The James Store was established in Andalusia, the building was occupied by Ganey’s and Benson’s Department stores.

When the building, then home to The James Store and Thrifty Stores, was remodeled in 1961, Star-News editor Ed Dannelly wrote that during the renovation work, workers who were re-sanding the floors noted that the flooring bore the “Dixie” stamp the Jackson Lumber Company used on lumber processed in its Lockhart plant. The company was a worldwide leader in production of longleaf pine flooring.