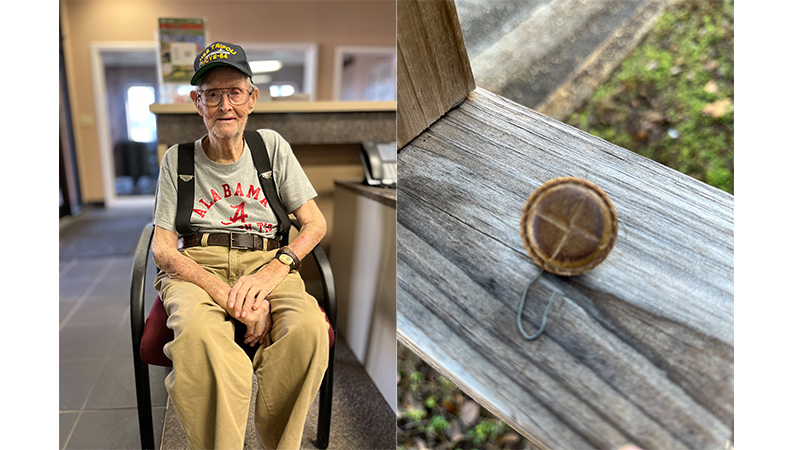 LEFT: Russell Johns Sr., 93 years-old, has kept the button with him for the last 60 years. RIGHT: This coat button has been part of a Christmas tradition by Johns’ Sr. and his family for several years. (PHOTOS BY ZACK MAIO AND LISA EISENBERGER)

One local family has a long-standing holiday tradition each year with the smallest of things bringing them joy and allowing for memories to be made: a coat button.

Gwendolyn Johns Sightler recalled her family’s time during the holidays as a young child.

“Going back to my childhood, it’s funny the things we can remember from so many years ago like remembering how Christmas was at that age. Daddy would bring home a real tree that smelled so good. Mom would bring a box of ornaments out from our hall closet. The entire family gathered around the tree, and Mom would hand each of us an ornament to place on the tree. She never told us where to put them but just let us hang them where we wanted. I remember our Christmas lights were huge and so colorful. The last thing to go on our tree would be icicles. We put lots and lots of icicles, and the beautiful lights would make them sparkle,” Sightler said.

Her brother Russell Johns Sr. found a coat button that was lying around and gave their mother the button.

“Little did we know that hanging the coat button on the tree that year was the beginning of a long-time Christmas tradition. Russell and I were the only children at the time, and he was around 4 years old. Four more were born after that, which made six of us. Kathy, Kenny, Patsy, and Nancy never had a Christmas without the button being on the tree. For the next 60 years, the button was an ornament put on the tree. Our parents would hide the button somewhere on the Christmas tree and see if we could find it. Once we spotted it, we just said, ‘I found it’ with smiles and giggles and didn’t say where it was, so the others could find it. It might not seem like much to a lot of people, but each year it became special memories for us.”

Sightler added that as the children got older, the ornaments changed, but the button was the one ornament that was always put on the tree. “Christmas Eve was always a big deal for us. We watched Christmas specials on TV and listened for the reports that Santa had been spotted, as they would say they could see Rudolph’s red nose. We talked of the birth of Jesus Christ and why we celebrate Christmas.”

They enjoyed snacking on several food items, which included apples, oranges, walnuts, Brazil nuts, candy canes, homemade divinity, and peanut brittle. After the children grew up, they continued to gather at their parents’ house for Christmas Eve.

“As everyone would arrive every adult, including husbands, wives, and grandchildren would anxiously still look for the button on the tree as smiles and laughter would erupt each time someone said, ‘I found it.’ I will never forget the glowing looks on our parents’ faces as this tradition continued year after year into the next generations,” Sightler said.

— This story was shared with the Star-News by Gwendolyn Johns Sightler.