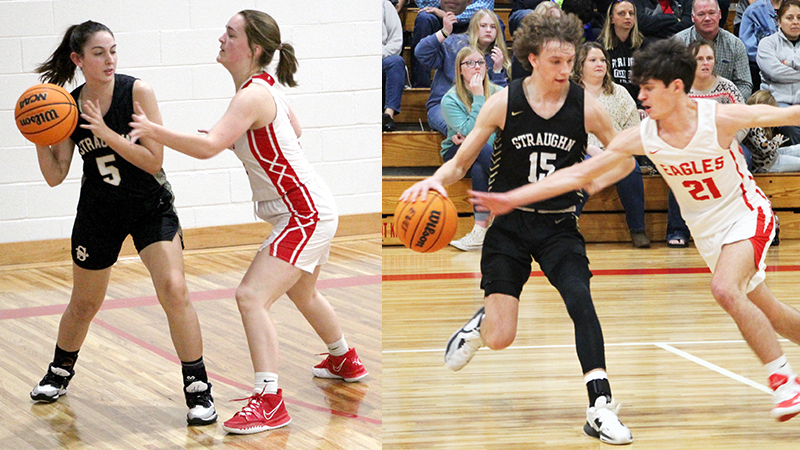 LEFT: Straughn’s Anna Driver, left, looks for an open teammate as Pleasant Home’s Briley Douglas defends the play. RIGHT: Taylor Sikes, left, looks to maintain possession of the ball for the Tigers as the Eagles’ Jackson Hawkins attempts to grab a steal. (PHOTOS BY ZACK MAIO)

Pleasant Home and Straughn each won a game in a pair of varsity basketball contests during a cross-county rivalry matchup Friday, Jan. 6, at PHS.

Melonie Harris opened the contest with four points in the first period, while Presley Bates also found the hoop for two. Bryleigh McBride went one-of-two from the line as the Lady Tigers took an early 7-2 lead. Presley Kelley scored the only two points for the Lady Eagles on a buzzer-beater. Bates sank a three-pointer and finished with eight points in the second period. Blakeley Smith also made a field goal, and SHS took a 17-7 lead into halftime. Piper Bulger and Hailey Ward each had two points for PHS before the break.

Bates knocked down another shot from beyond the arc in the third, while Aubrey Pittman converted three free throws. Smith and Madison Williamson rounded out the period with one-for-two showings at the line for Straughn. Ward and Emma Grace Anderson grabbed two each, but Pleasant Home trailed 25- 11 with eight minutes remaining. Smith closed the game with four points and hit a shot from downtown. Nevaeh Marshall and Anna Driver etched their names into the scoring column for SHS, while Ward managed the only two points from PHS in the final frame.

Bates paced the Lady Tigers with 13 points in the win and was followed by Smith at seven. Ward led the Lady Eagles with six points in the loss. Both teams opened area play Tuesday as Straughn hosted W.S. Neal, and Pleasant Home travelled to J.F. Shields.

Taylor Sikes led the Tigers with nine points and made it rain from downtown three times in the opening period. Micah Turner scored five points in the frame, and Parker Black also converted a bucket for a 16-9 lead after one. Luke Gatewood earned five points for the Eagles as Dillan Purifoy and Jackson Hawkins also made field goals. PHS came out on fire with 17 points in the second period. Mason Anderson drilled two shots beyond the arc and tallied eight points. Purifoy added four more to his total, while Gatewood knocked down another three-pointer. Layne Grantham recorded five of the seven points from SHS who trailed 26-23 at halftime.

Anderson kept torching the net from long range and had eight more points after the break. Purifoy and Sikes each notched five in the third. Turner was next with three, but Pleasant Home increased its lead to 43-34 with eight minutes left in the game. Purifoy banked another three in the fourth and went three-of-four at the line. Anderson closed out the frame with five, while Brodie Griffin hit two baskets. Turner and Black led Straughn down the stretch with three each, but struggles from the free-throw line proved costly. PHS had 18 points in the last eight minutes and held SHS to only 10.

Anderson was the top scorer for the Eagles with 21 points. Purifoy also tallied double digits with 17, while Gatewood scored nine in the win. Sikes led the Tigers with 16 points and was three-for-three from the line. Turner garnered 11 in the loss and was followed by Grantham and Black at eight and seven points, respectively.