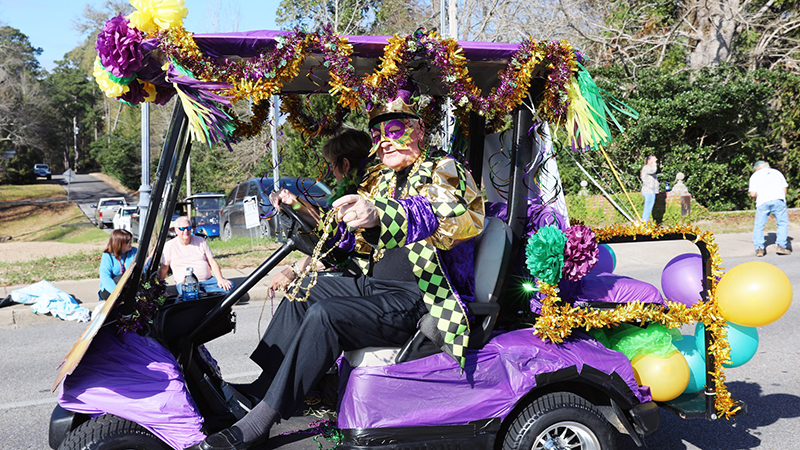 Preparations are now underway for the second annual Mardi Gras Parade in the city of Andalusia on Saturday, Feb. 18, at 2 p.m.

The first annual parade was held last year and proved to be so successful that organizers are excited about bringing it back another year.

“I have always enjoyed Mardi Gras and wanted to do a local Mardi Gras parade. I asked the public back in 2017 on my Facebook page and received a great response. My family and I would always participate in the annual tradition, and we really enjoyed it. It was fun to go and see in Mobile and New Orleans, so I thought it would be a great attribute to bring to our community. A lot of us travel to see these parades in other places, so it makes sense to have one in Andalusia now,” lead organizer Vanessa Nelson said.

Nelson is grateful for the support of others helping her this year.

“We went to city officials last year and received permission to hold this event. It was so much fun to do a Mardi Gras celebration in Andalusia. With our second parade, I am glad to have Brenda Gouge, Tammie Evans, and Carol-Ann Mullins assisting me.”

Organizers are looking for walkers, riders, floats, and boats, just to name a few.

“Last year, we had a fabulous turnout on such a beautiful day. We were not expecting that big of a turnout because we only went to City Hall. It was packed, and we also had a lot of participants for the parade. I hope we double or triple that number this year with people already contacting me and showing interest. I have about 20 entries already. I just want to see people participate and have fun locally rather than travel to bigger cities when we can have the same fun right here in Andalusia,” Nelson added.

Participants will have to sign a form acknowledging the rules and regulations in place. There is no entry fee, but entries will need to provide their own throws. “We want to keep this family-oriented and a lot of fun. By signing the form we will have, entries will know what they can and cannot do.”

Nelson said there would not be a ball held this year because organizers want to put more emphasis on the parade.

“Although we had a good turnout last year, we are going to back away from the ball this year and focus more on the parade. We want to make the parade great, and without the parade, you don’t have a ball. Our focus this time is to grow the parade and eventually have a certifiable crew that you would see at a larger Mardi Gras parade in Mobile or New Orleans. Our ultimate goal is to have a true parade with all the bells and whistles like you would find in other places.”

She stated the route would be longer this year, which will start at the First Baptist Church and go down East Three Notch Street before the end near Pirate Graphics. “We ask for everybody to be lined up no later than 1:30 p.m. because we will roll at 2 p.m.”

Entries may visit the Andalusia Mardi Gras page on Facebook. A registration form will be provided to those who have already pre-registered soon.

For more information email kreweofandalusia@gmail.com or call Vanessa Nelson at 334-488-3545.