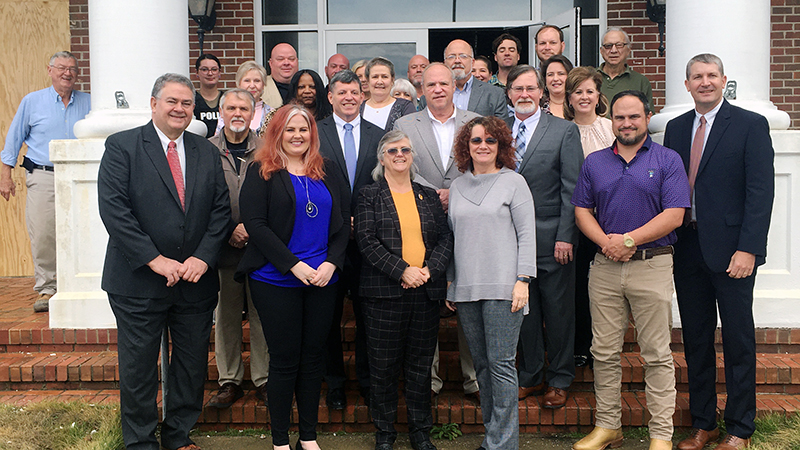 Representatives of Southern Independent Bank gather with local citizens to celebrate the bank’s purchase of the former Wells Fargo building in Florala, which closed its operations in the town in 2020. (SUBMITTED PHOTO)

Setting its sites on future growth in service to the citizens and business owners in Florala, officials at Southern Independent Bank announced the purchase of a building most recently serving as home to Wells Fargo Bank, which closed its Florala operations in 2020.

The facility, located at 22769 Lakeshore Boulevard, encompasses 11,000 square feet. Southern Independent Bank President Micah Garner said the bank will initially utilize 3,000 square feet and will lease most of the remaining space. He said Southern Independent Bank is in the process of selling its existing lot in an effort to bring more business to Florala, and anticipates occupying the new facility by the end of May 2023.

The new facility will offer customers an expansive lobby area with multiple teller windows and private loan offices. Additionally, the drive in offers three lanes: two with tubes and one at the window. Construction is underway to create a drive-up ATM in the drive thru area.

Rhonda Geohagan will continue to serve as Branch Manager while Dawn Reeves will serve as a loan officer and New Accounts Representative.

“This bank building was originally built by First National Bank of Covington County to serve as a true community bank, went through three different mergers among regional banks and now it has come full-circle to return to that role of a community bank,” Garner said. “We look forward to continuing our mission as Florala’s hometown bank. To us, being independent means providing relationship-based, service-driven banking and to providing accounts, financial services and technologies that enhance our customers’ banking experience and make their lives a little easier.”