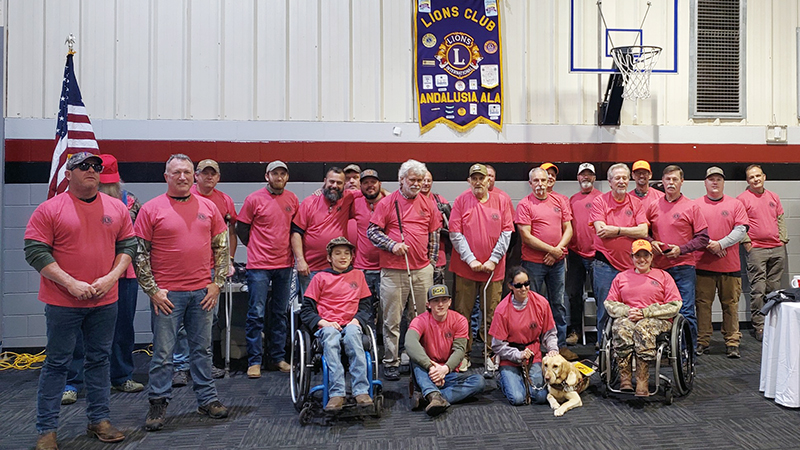 Pictured above are members of the Andalusia Lions Club, volunteers and participants of the seventh annual Physically Challenged Deer Hunt event held in Andalusia over the weekend. (SUBMITTED PHOTOS)

Despite the rainy weather and cloudy skies, the Andalusia Lions Club was able to hold its Physically Challenged Deer Hunt for the seventh year last weekend. 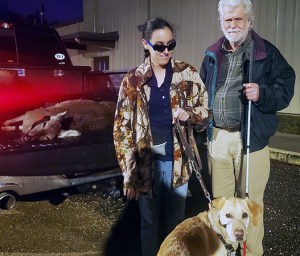 Gretchen Brown, 22, of Washington, Indiana was named the “Top Gun” at the event. Brown is pictured with local organizer Dirk Price and her guide dog, Beacon.

Organized and coordinated by Dirk Price, an avid sportsman who is blind, said the event started with activities Friday, Jan. 20, at the South Alabama Gun Club Rifle Range.

“We had 12 physically challenged hunters that came out and practiced using adaptive technology. Each of the participants was paired with an able volunteer to provide assistance with getting out into the woods. Volunteers worked with several types of disabilities the participants had,” Price said.

Participants met their personal guide volunteers to practice, go over safety rules, and determine what types of aid and assistance they would need over the weekend.

The volunteers include avid outdoors enthusiasts and veterans who helped guide the participants.

“We had three blind people use a G-line smart shoot adapter, which mounts a smartphone onto the riflescope. It uses the camera app on the phone to project the crosshairs and target on the screen. The volunteer helper can direct the blind person where to aim and when to shoot. We had two individuals in wheelchairs that we would wheel out or drive them out. We have some shooting houses that are able to accommodate a person in a wheelchair with an aid,” Price said.

Gretchen Brown, a 22-year-old woman who has been blind since birth, was named the event’s “Top Gun” winner. “She came to us from Washington, Indiana, and shot both a buck and a doe. She was named the Top Gun for getting two deer.”

Price said he was thankful to the many organizations that helped make this year’s event possible.

“There is a long list of donors who helped us with cash expenses. We had church groups, local companies, and individuals who donated both cash and products. We raised enough to cover hotels, some of which like the Best Western in Andalusia gave us a discounted rate. The Lions Club was able to pay for the hunting licenses. Regions Bank helped by donating a lot of food. We had a big wild game dinner Saturday night with around 60 people attending. It was a recognition dinner to name all the donors,” he said.

Price added that each of the hunters received a gift bag, while a raffle was also held.

“The City of Andalusia gave us use of the Coleman Center with a lot of tables and kitchenware. We were able to do breakfasts, lunches, and suppers all three days after the participants went hunting Saturday and Sunday. At our big game dinner, we had some antelope, all kinds of venison, catfish, snapper, and king mackerel, just to name a few.”

“It was a successful event for us that gets better every year. We couldn’t do it without the help of donors who make the event possible. We are very appreciative of the help we receive each year. The Lions Club picks up hunting licenses for the participants with the funds we accumulate. Andalusia is certainly very generous, and we really appreciate everything the city does,” Price said.

Price, who serves as president of the Lions Club, stated the idea for the event began when he attended the Kiwanis Club’s annual Sportsman’s Expo.

“About 10 years ago, I had my new guide dog, and my wife dropped us off. We were bumping around from booth to booth. A man stopped me and asked me if I wanted to go hunting. I explained to him that I was blind, and he told me he was with the Physically Challenged Bowhunters of America. He told me I could join for $10, and he would get me out hunting. I went on two hunts with them and thought I could give back by starting one for other physically challenged hunters. We try to host around 15 participants a year and make it a quality hunt for all,” Price said.

For more information about the hunt, email Price at dirkp@centurytel.net or call 334-343-3894, or visit Andalusia Lions Club-Alabama on Facebook.

“We thank everyone who was a part of our seventh annual event. If anyone wants to help with expenses or provide donations for next year’s event, please let us know,” he said.