An Andalusia father was arrested Friday for allegedly inflicting injuries consistent with “shaken baby syndrome” on his newborn daughter.

He said a “safety plan” was immediately established with the family of the victim until the case could be investigated, an established protocol in all abuse cases.

“The victim, which was then a 7-week-old infant, suffered at least eight fractures to her bones, including her ribs and legs,” Snodgrass said. “The fractures were in different stages of healing, indicating they had occurred at different times since her birth. She had also suffered at least one brain bleed and significant bruising to her face.

“Sacred Heart medical personnel diagnosed her as having injuries consistent with ‘shaken baby syndrome;’ however, since then she has been released from the hospital and is at home with family.”

Snodgrass said the child is doing “well but will require regular follow up visits (with doctors) to ensure her continued health treatment.”

After the main portion of the interview, Snodgrass said it was determined that the child’s father, Gibson, had caused the injuries.

Gibson is charged with one count of aggravated child abuse, a class “B” felony, due to the “graphic extent of the injuries and the age of the victim,” Snodgrass said.

He explained why Gibson is facing only one criminal charge, stating, “Aggravated child abuse encompasses multiple counts of the lesser-included offenses of torture and willful abuse of a child under 18,” he said.

Gibson confessed to committing the acts and turned himself in to the authorities Friday, Snodgrass said.

He was booked into the Covington County Jail under a $1 million bond for the abuse charge; however, Gibson is an Alabama probationer for a property crime conviction.

He faces an additional charge of violation of probation and is now being held without bond.

Snodgrass said the victim’s family fully cooperated with the investigation.

Sheriff Dennis Meeks said child crimes – especially abuse – can be the most difficult to investigate.

“Oftentimes there are no witnesses to the crime,” Meeks said.

“A child, especially an infant, is defenseless and innocent. We will continue to investigate crimes against children and seek prosecution to the fullest extent of the law of those who would harm or victimize children in our community.” 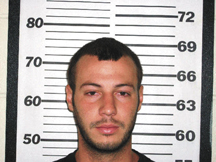