For the second time in less than a week, an Opp man was arrested for allegedly having an inappropriate sexual relationship with child.
Last Saturday, Devon Dray Vaughn was charged with rape and two counts of sodomy after he allegedly confessed to a consensual sexual relationship with a 15-year-old girl.
He was booked into the Covington County Jail that day and released Monday on a $60,000 bond.
Investigator Walter Inabinett said Tuesday, the Opp Police Department received a second report alleging another incident – this one involving an 8-year-old child.
“The report we received was in reference to the (alleged) sexual abuse of the child that took place in the city of Opp in 2009,” Inabinett said.
Inabinett said following a two-day investigation, Vaughn was again arrested – this time charged with one count of sexual abuse of a child under the age of 12.
After his arrest, he was transported to the county jail, booked in and later released under a $10,000 bond.
It is unknown as to the relationship between Vaughn and the recent alleged victim, as no other details surrounding the investigation were made available; however, in the initial case filed against Vaughn, a family friend of the victim filed a complaint with the OPD. The case was later turned over to the Covington County Sheriff’s Office once it was discovered the alleged incident took place in the Babbie community. 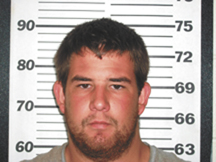