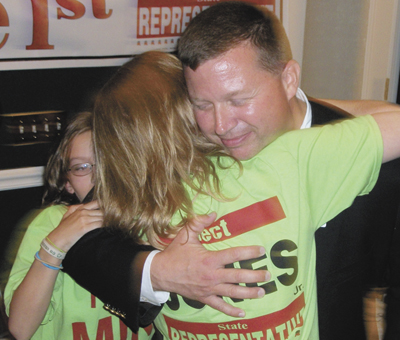 Jones gets a congratulatory hug from his wife, Kathy, Tuesday night.

Mike Jones Jr. won the Republican nomination for state House of Represen-tatives District 92 yesterday, capturing 63 percent of the 5,636 votes cast in the race.

Jones, an Andalusia attorney and former member of the Andalusia City Council, collected 3,568 votes to opponent Greg White’s 2,068. White is an accountant and the former chairman of the Covington County Commission.

Jones called his Tuesday win “humbling” and commended White on a “clean” race in a “hard-fought, long campaign.”

“And this was a clean campaign on both sides, and I think the people were ready for it,” he said.

He said he will strive to earn the support of White voters.

“There are a lot of people who came out and voted (Tuesday) who didn’t know me personally,” Jones said. “Between now and November, I hope they continue learning me and trusting me. I’m trying to give them a reason to vote for me.

“I started this campaign on a prayer,” he said. “I said if God wanted me to win, He would put that in my path. If not, He would point me in a different direction.

“This whole experience has been humbling,” he said. “I can’t thank everyone enough.”

Jones said first on his post-election to-do list is to spend some quality time with his family.

White said he was disappointed in the outcome, but appreciated the race Jones ran.

“I congratulate Mike Jones,” White said. “He ran a clean race and I appreciate that. We did, as well.”

White expressed his appreciation to volunteers and supporters.

“So many people volunteered, stopped by and offered to help,” he said. “That’s gratifying.”