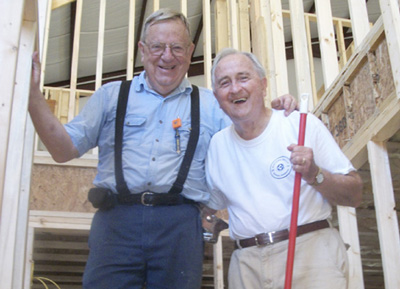 Walt Miller and John Fulsom, of Campers on a Mission, pause on the building’s second story steps.

For the “Campers on a Mission,” the Christian ministry that assists with the construction of church buildings at no cost to the churches, it’s a proof-positive of their mission.

For church members, the 22-classroom facility – complete with a second-story basketball court – is a way to servethe families and youth of the congregation.

The “Campers,” who rolled into the community five days ago with some 20 RVs, will spend a total of four weeks at the site. This is their second project in Covington County in less than a year. In July, the group spent two weeks at Hopewell Baptist Church constructing a building that is used to hold Sunday school classes.

Their services are free – only asking for meals and a place to park their RVs in return.

Project leader Walt Miller, a member of Campers on Mission from Enterprise, said the ministry is a fulfilling one for those who participate.

“Most of us are retired people,” Miller, a retired pilot, said.

“We don’t have a lot of ‘construction’ experience, but we have willingness and a desire to help. We tell people if they’re interested in what we do, all you have to have is an availability to work. We’ll teach you what you need to know about everything else.”

Woody Woodrum of Enterprise, a fellow retired pilot, is now the electrician in charge.

John Fulsom is a retired educator and principal from the Brewton/Atmore area. Friday, he was doing clean-up on the structure’s lower level.

Each classroom is data wired for television, computers and Internet.

However, the most unique feature about the facility is the second-story basketball court.

An elevator, which is yet to be installed, will allow for easy travel between the floors. Outside access to the building feeds directly onto the second-floor.

Each voiced their enthusiasm about the project.

“This is an amazing project for our community,” Cox said. “Mr. Walt and his guys have done outstanding work. We’re so thankful for their help.”

Work will continue for the next three weeks on the project.

For those wishing to get a sneak peek at the new facility or at the work that’s happening at Carolina Baptist, on Thurs., June 17, when the church hosts “The Chuck Wagon Gang” in concert at 7 p.m. There is no admission, but a love offering will be taken.