Another opportunity to get better 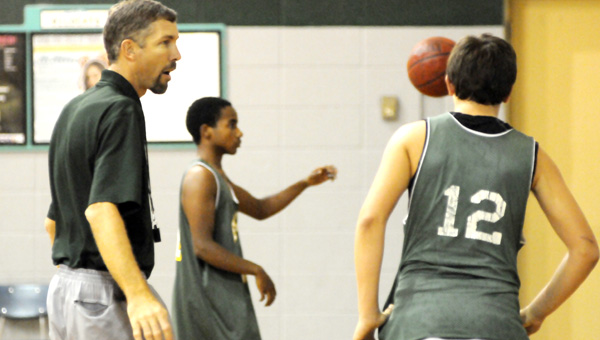 Florala boys basketball coach Brad Garner said a golden opportunity for his team to get better this season is within reach.

Garner said a goal this season for his team would be to be competitive in area play.

“I think our goal would be to compete in the area, and stand a chance at winning it in the regular season at the area tournament,” Garner said. “I think that’s realistic for us.”

The Wildcats will have the same team roster as last year, with the exception of Zac Fleming, who is out for the season after undergoing ACL surgery last Tuesday.

Florala’s boys team is comprised of five juniors, two sophomores and one senior. The lone senior on the team is Lavoris “Lobo” Ball.

“Everyone of those guys has one year of varsity experience accept for the two 10th graders,” Garner said. “As far as experience goes, we’ve got some juniors that know what it’s about.”

This season, the Wildcats will compete in Class 1A, Area 2 with rival Pleasant Home, Kinston and Geneva County.

Garner said he doesn’t know much about Geneva County because the last time he played against the Bulldogs was at a Christmas tournament approximately five years ago.

Additionally, Garner said the team to beat will be Kinston this year.

“They’re really the team to watch,” he said. “I think they pretty much have everybody back.

Before the Florala starts area play in January, the Wildcats will be competing in two tournaments — the Andalusia Invitational at AHS, and the Alabama-Florida Shootout in Pleasant Home.

Garner said these tournaments will be a good warm up for his team before area play begins.

“We get to kind of find out what we’re made of there,” he said of the tournaments. “I think we have a good shot at being competitive with those.”

The Wildcats will begin their season tonight against Samson at home.

Garner said practice leading up to the season-opener has gone well, and that his team must have a good start this season.

“We’ll play our first game with 10 practices,” Garner said. “Until we throw them out there, and get somebody different, you always learn more in the first game.

“We’ve just got to start off well,” he said. “I think our biggest thing is to get better as the season goes along. I think we stand a chance to do that. I think we have a lot of potential going into this season —we just don’t know were it’s going to come from. There’s a good chance for us to be good.”

Wildcat basketball takes down pair of 4A opponents